July 25th. We went to collect Ellie today from Schipol Airport. 2 buses and a train ride later we made it with 10 minutes to spare! We could not face the bus ride back so we take a taxi. Trust us to find a taxi driver who had no idea where Durgerdam was and we had to show him on Google Maps – lots of Euros later we were back at the boat.

Back at the boat we were away quickly keen to get going but forgetting to put the mainsail reeling on to ‘free’ it meant we could not use it. We were careful to follow the Durgerdam channel as marked depths either side were less than 1 m. Past the barge mooring posts we turned onto a bearing of 065 into the main channel and attempted to cross over to the red P18 buoy. There were so many barges heading to Amsterdam that we had to dodge in and out and it was not until P14 that we were safely on the far side of the channel.

We then had two miles before the Hooft channel joined us at the red P8 buoy to our starboard and another stream of barges crossing our path to head down towards Amsterdam. At the earliest opportunity we turned to the NE on a bearing of 045. Our plan was to to stick with this for 12 m then head West towards Vollendam. By this time the wind had started to build rapidly, and we had a brisk sail just on the genoa alone.


The Markermeer is only about 3 m deep outside the marked channels and it soon develops a vicious chop in strong winds…..which we had! The wind force was rising all the time, from F4 through F5 then F6 with gusts of almost 30 knots. Grace pitched a bit but punched her way along. At 052 35′ N and 005 14′.4E we made our turn towards Volendam. On a bearing of 085 we were close hauled for 5 miles until we made the channel for Volendam and a little bit of welcome shelter afforded by the land. The channel is quite complex with a spur to starboard into the new Marina.
At the Ameldung Steiger we are directed to B17. And it had been all going so well…….oh dear in the fairway I turned too late to get into our box mooring and got in between two lines of boats with just a couple of feet to spare at each end! Grace does not like to turn out sharply on account of her big wide German bottom and no bow thrusters! However eventually I did manage to complete a 50 point turn, get her around then in for another go. By then and after much engine revving we had acquired quite an audience! The benefit of which was that as we jiggled into our box mooring their was some kind soul there to take our bow lines!Volendam is quite a pretty place with a huge football stadium and rather a good chandlery which took my credit card! So we invested in a rather good boat hook and two new lighter mooring lines which might be easier than our thick old three stranders to throw over bollards and posts! Plus we stocked up on my favourite maps!
It is also famous for Dutch caps (as featured in the national dress)! It’s other claim to fame is that it the source of a style of pop music known as eel pop!
July 26th. The weather forecast is not looking great for Friday and Saturday morning. We feel we would like to be somewhere where we could be nicely tucked away out of the wind and would be interesting, with something to see before we cross the
IJsselmeer and head inland again at Stavoren. We were recommended by a man in a bar in Dordrecht to go to Hoorn and Enkhuizen as they were starting point for much of the East Indies trade. They were very old towns with real Dutch character. Also there is a great museum at Enkhuizen which must not be missed…..and ideal place to be for the bad weather forecast for Friday.

As usual, there are the predictable doom mongers who predict all sorts of weed related disasters ranging from a clogged propeller to being totally engulfed in weed and getting stuck, never to be seen again. As usual we ignore all the advice, good or bad and carry on regardless to make the same mistakes!

It is a beautiful day with a Westerly F2 wind and after dodging the Edam Ferry we head out towards the North on a bearing of 019. All sails are set and we are gently ghosting along at 3 knots. After 5 miles we change our bearing to 330. Within a couple of miles we suddenly start to see bubbles in the water and then big banks of weeds. Anne steers while Ellie and I spot big clumps of weed to try to avoid. It is fortunate we are going so slowly as we glide our way through, almost avoiding the biggest patches.


As we approach the Marina entrance, we take in the sails and start the engine, but as soon as I put Grace in gear and give her some throttle there is a terrible vibration, our prop is fouled by the weed. Going astern to try to shift it the vibration is even worse and we no reverse motion. This is going to be interesting! I really hope our berth will be easy! We glide up to the Meldsteiger at dead slow, barely above idle speed the vibration is bearable! We are given a box number, fortunately it is quite easy and we glide into it!

Big clump of weed fell off our keel and prop!

We make Grace secure and then notice a big patch of weed float away from our keel. That is reassuring but there is no option, someone has to go into the water to check that the prop is free. We have an auto prop, which although seems very efficient in forward and reverse over a fixed bladed propeller seems very sensitive to getting stuck and therefore becomes easily out of balance. It is just over a week since we had Grace lifted for another propeller problem and the prospect of saving lots of Euros soon has me donning my wetsuit! I ask the harbour master if the water was safe, he looks at me as if is I am mad and says that he would prefer to pay to get the boat lifted rather than go in! 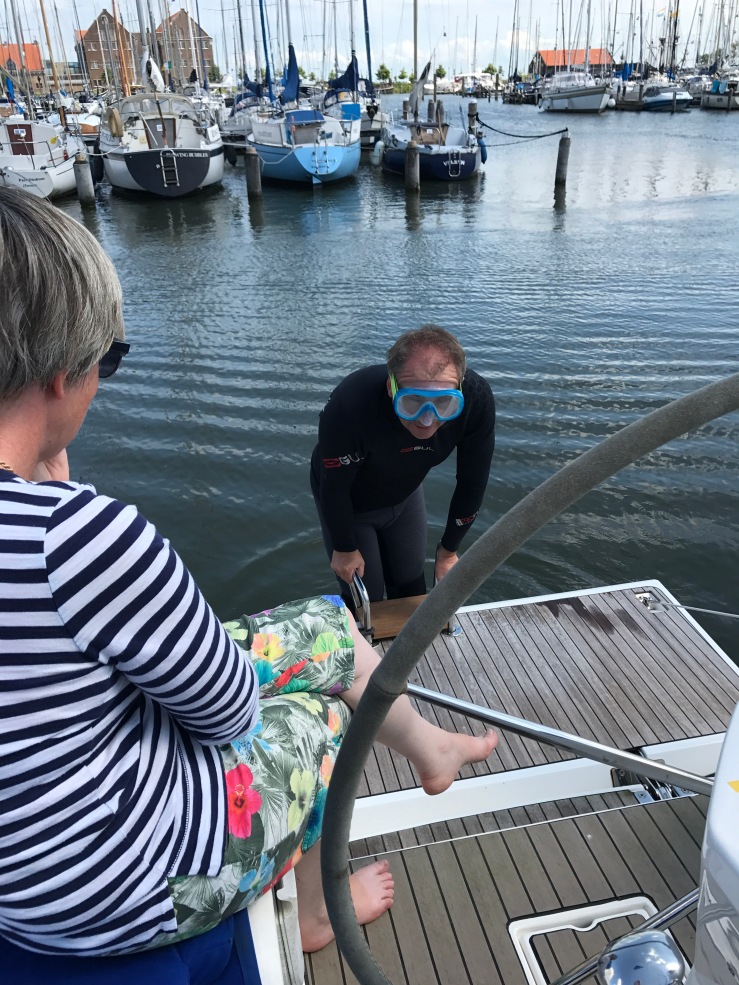 God this water is cold! I can’t breathe easily, no wonder the RNLI say if you fall in the first thing you should try and do is to float and get your breathing under control. It is difficult, I put my head under but cannot see anything! There is nothing for it but to put my phone into a plastic bag and tape it to a boat hook and try to video the sail drive. Success! After two attempts and several mouthfuls more of Marina water we get a good enough picture of the propeller and no weed! I can come out and go for a hot shower.
The town of Hoorn is surprisingly enormous, I had imagined it to be a small town but it is packed with houses dating from the 17th century – they tilt at every angle and it is amazing that they stay up! The old harbour has lots of great sailing barges, including Hollands oldest one! 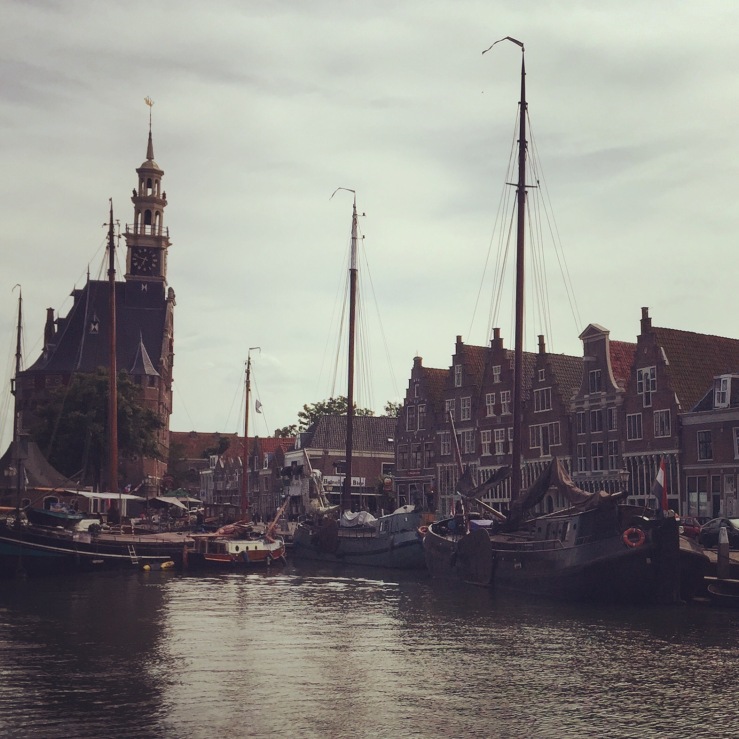 After partially drowning and poisoning myself my priority now is a drink and food. We find the old customers house in the square and have something nice to eat and drink while we watch the day’s market close and get taken away, revealing a statue of Jan Coen, a local celebrity who was a ruthlessly cruel but efficient colonial administrator! They did say that the statue was a bit controversial!

Jan Coen
It is the 27th July and we are going to Enkhuizen, we will spend a couple of days there and ride out the stormy weather and crossing the IJsselmeer on Saturday afternoon when it has blown itself out. It is a beautiful morning when we leave Hoorn. It is blowing a gentle F3 from the west, perfect for a very broad reach up towards the lock at Enkhuizen. Grace is sailing well, initially on the mainsail then with the genoa as well on a bearing of 120 and away from the horrid weed beds. At the yellow Sport-G buoy we gybe onto a bearing of 055 and pick up with a large sailing barge just off Appelhoek. 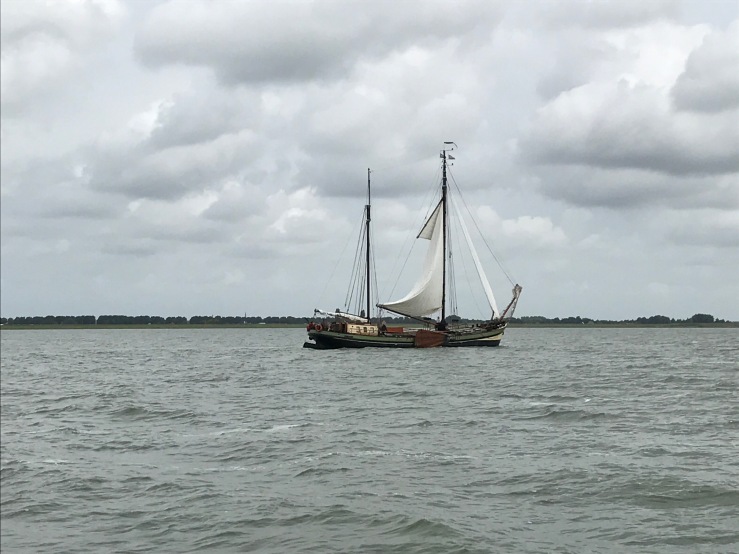 We are both going about 3 knots and stay in company close inshore for about 5 miles until we reach the Naviduct Sluis at Enkhuizen.

Dividing the Markermeer from the ljsselmeer is an 37 km long dyke that runs from Enkhuizen to Lelystad with Sluis at each end to allow you to go through. The Marina, Compagnies Jachthaven is just through the Naviduct and on the edge of the town. In the Naviduct we hang back a bit behind the our sailing barge friend, coming out of the lock his stern is all over the place and the yacht next to him gets a few sweaty moments as this great big 30 tonne lump of iron slowly but irresistibly drifts towards him, with inches to spare the barge gracefully moves on and everyone breathes a sign of relief.
We cross the channel into the Marina, just at that moment we meet 3 yachts coming out and a ferry joins us coming in but by now I am used to dodging about and my heart rate hardly rises! Right down at the end is the meldsteiger and the pontoon manager tells us which box mooring we have, so a swift u turn and we are there. Squeeking through the piles we lose a bit of fender but the gelcoat is spared! We are soon moored up securely and ready to go exploring Enkhuizen!

The remarkable thing about this Marina are the swallows, the are everywhere flying in and out of the rigging at great speed, there are thousands of them roosting under the boardwalks and fly around you when you walk along it!

Off to explore Enkhuizen 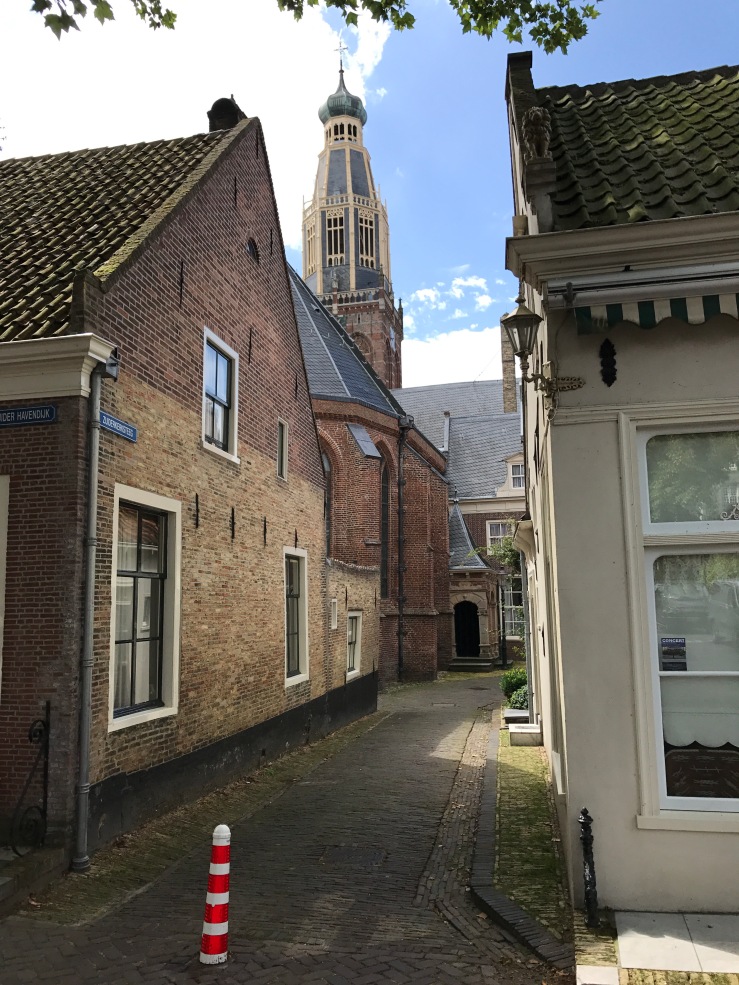