What a wash-out! Twice our summer cruise has had to be abandonned due to the terrible weather, the first time was at the beginning of August ahead of Cowes week and then now in late September. The prospect of being storm bound and bobbing around on the end of a pontoon in some godforsaken harbour, trapped in 80 square feet with a wet dog is not going to be much fun….but that’s sailing for you! So I created a virtual cruise instead, where wind, weather and tides were always perfect!

In the lock at Birdham Pool

Leaving 2 hours after high tide at Birdham and slipping through the lock at 0815. We motored out into Chichester harbour; down past Itchenor Reach and Roman Transit, keeping the ancient stand of trees behind us as we sailed down toward the Camber Beacon. At East Head, we past the last, still sailing Lowestoft fishing smack at anchor. Apparently the design was revolutionary at the time, increasing the efficiency of the fishing fleets and was the start of the overfishing of fish stocks! Heading South on 180, the strong ebbing tide swept us out past Hayling Island towards the Bar Beacon and over Chichester Bar, clearing it with 1.4 m under our keel. 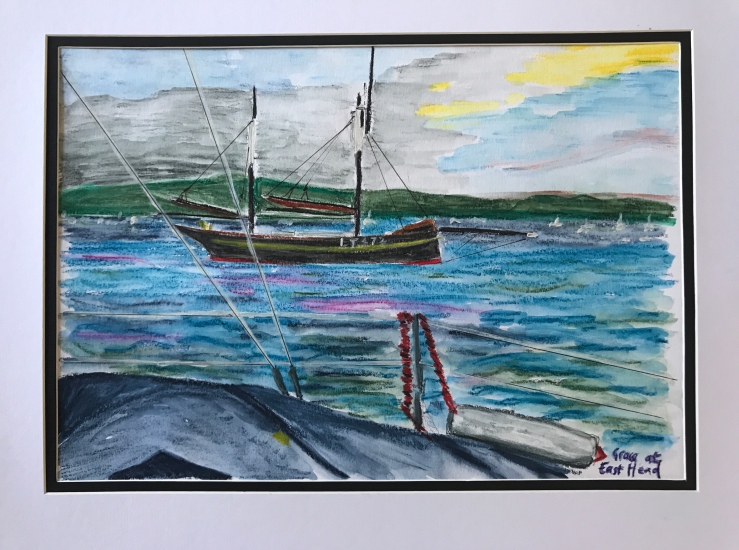 ‘Sails up’ at 0925 as we past the West Pole and headed towards the Dean Tail Cardinal on a bearing of 240 in the nice light South Westerly breeze. Once at the Cardinal we gybed onto a very broad reach to 280 towards Seaview on the Isle of Wight. By 1200 we were tied up to a visitors buoy just off the Seaview Sailing Club. A rib from the club took us ashore in time for lunch. Later, slipping our moorings we set off on a Northerly course for Gosport and the Royal Sovereign Marina. Royal Sovereign Marina is one of 4 original naval victualling yards, similar to the one in Plymouth. Portsmouth has 24 hours, all weather access so perfect for our first nights stop. As an NCI watch keeper I was keen not to make any mistakes when sailing under the watchful eyes of the NCI in the tower at the harbour mouth!

Early next morning we left for Yarmouth, it is a distance of around 31 nm so would take us a good 9 hours given fair winds, which for the purpose of this virtual cruise it will be! Taking the small boat channel we passed the NCI tower and out towards the Spit Bank Fort. Then at the War Memorial we followed the transit with the back of block of flats to pick up the Swashway and out towards Ryde on the Isle of Wight. We were reaching down the East Solent on a bearing of 280. At around 1230 we took the inner channel past Ryde Middle and the Bramble Bank.

We passed Cowes to port and were then into the West Solent. We were making good progress and we could see mouth of the Beaulieu river to starboard. In the rising easterly winds we had a swift reach all they way down to the Yarmouth Pier and the entrance to the marina. Originally we had booked a walk a shore berth for the night as it was the start of Cowes Week and the place will be packed, but as we not able to make it, we rescheduled for September….but even then we had to let it lapse due to the terrible weather. Next season we really will make it to Yarmouth! It was especially disappointing as we had hoped to see the SailGP racing on the Friday.

Grace on approach to Yarmouth 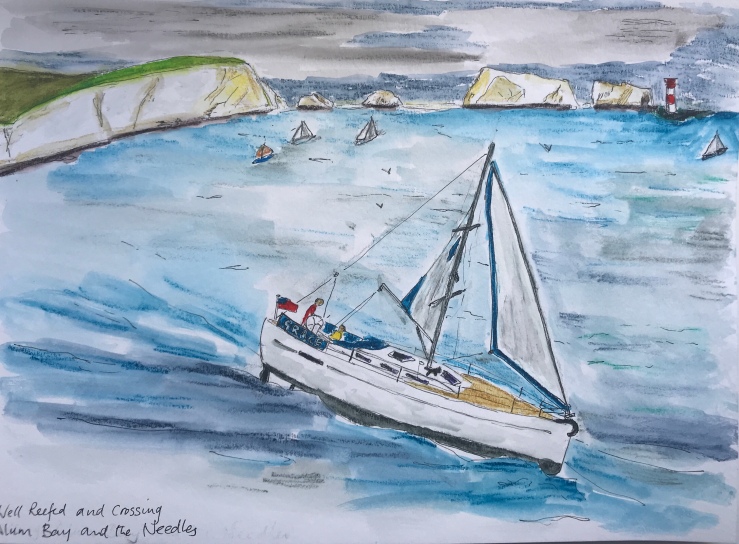 Grace at Alum Bay and the Needles

Our next leg was to sail to past Alum Bay and on down the Needles Channel to the Needles Light. It is important to stay clear of the Shingles Bank and its overfalls. The thought of the breakers to starboard was not an attractive proposition! Clearing the SW Shingles Buoy we sailed on for approximately 2 nm to the safe water mark before making our turn to track across Christchurch Bay. We passed Hengistbury Head at about 5 nm to keep clear of the strong tidal streams. It is possible to anchor off the fort at Hengistbury Head but it is not really very comfortable in anything but good weather and light breezes.

On a bearing of 285, we crossed the 10 nm into Pool Harbour. Passing South Haven Point we motored up the North Haven Channel, keeping Brownsea Island to port. Then taking the channel to starboard marked by the south cardinal, we moored up at the Town Quay.

Although only a short hop along the coast, to get to Swanage requires a 9 nm detour into the bay to clear the Old Harry Rocks off Handfast Point. We anchored in the bay in 4 m off the pier at Swanage. The holding is not great in the thin sandy bottom but okay for a quiet night if vigilant!  ‘Anchor up’ early next morning gave us plenty of time to get past Anvil Point and St Albans Ledge. We motored out on a bearing 090 for 2.5 nm to clear the overfalls on the Peverill Ledge. Then ‘sails up’ for a fast broad reach on a bearing of 230, keeping the Anvil Point Lighthouse to starboard and then on for a further 10 nm to clear some very rough looking water over St Albans Ledge. At the yellow DZB buoy we changed course to NNW for approximately 8 nm past Warbarrow Bay to pick up the mouth of Lulworth Cove. This can be a really tricky spot to find, but we kept a lookout for the old coastguard hut to the western side and had set a waypoint on the chart plotter for the mouth of the cove. Keeping slightly east of centre in the entrance to avoid a submerged ledge, we anchored toward the northern side in about 2.5 m of water. In the south easterly winds, the cove is very sheltered but if it shifted to an onshore wind then it becomes untenable and you need to be ready to clear out quickly! 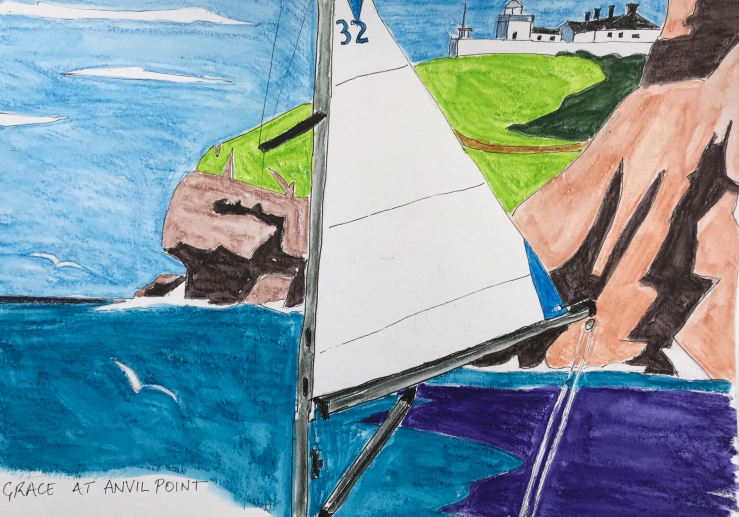 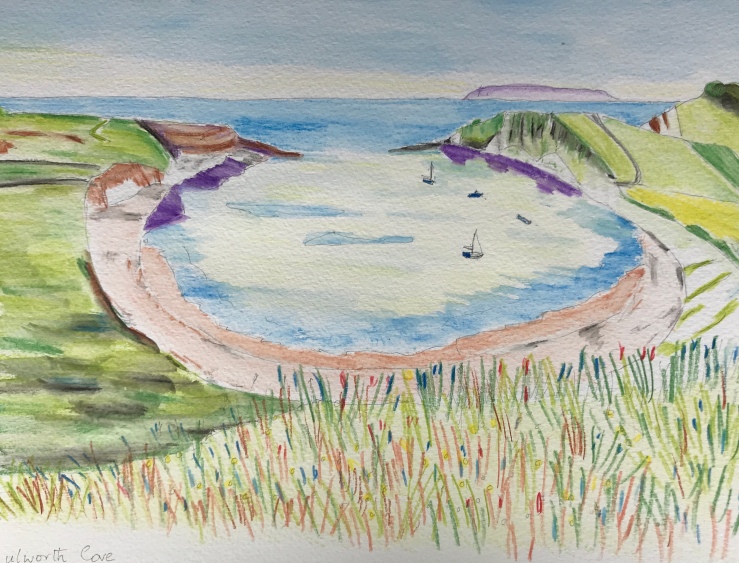 The next leg of our imagined cruise was a relatively short sail of about 8 nm over to Weymouth. The harbour mouth is very, very easy to see, the 50 m tall Weymouth Eye Tower can even seen from the cove! We motored into the harbour and up through the lifting bridge and into the marina. The final part of our cruise is the most challenging, that is to cross Lyme Bay. It is a voyage of about 60 nm at its shortest, a reasonable 10 hour trip if you can average 6 knots but Grace can only 4 knots so it becomes a bit of a marathon, especially if you want to avoid night sailing!

Our plan for Lyme Bay was to break it down into two day sails, the first leg on leaving Weymouth was to follow a bearing of 160 and to clear the West Shambles North Cardinal Buoy to starboard. It is a distance of about 8 nm. The alternative route meant keeping close in on the inside of the Shambles, keeping the South Cardinal Buoy to port. However all our pilot books were clearly ‘gloomsters’ and warned against it, predicting all sorts of doom and catastrophe at every turn. With only a saving of around 4 nm it seemed scarcely worth it except for the superb view of the Bill of Portland lighthouse!

Once past the West Shambles, we changed course to 230 for a deep leg of 10 nm to get past the rough water around the Bill. We were now into Lyme Bay proper, it is stunning in fine weather. To starboard we had the expanse of Chesil Beach as we headed towards West Bay, Bridport’s port! It is one of the few ports along this part of the coast that does not dry at low tide. There are newish visitor berths in the outer harbour that we could use, providing it is not spring tides! Finding the entrance is really quite easy, simply follow the line of the very distinctive ochre cliffs to the west and the entrance to the port is dead ahead.  We did have an alternative port up our sleeves in case the harbour was full, that would be to try for a space on the end of the seasonal pontoon that is moored off Lyme Regis. It would not be comfortable and only just deep enough to take Grace. 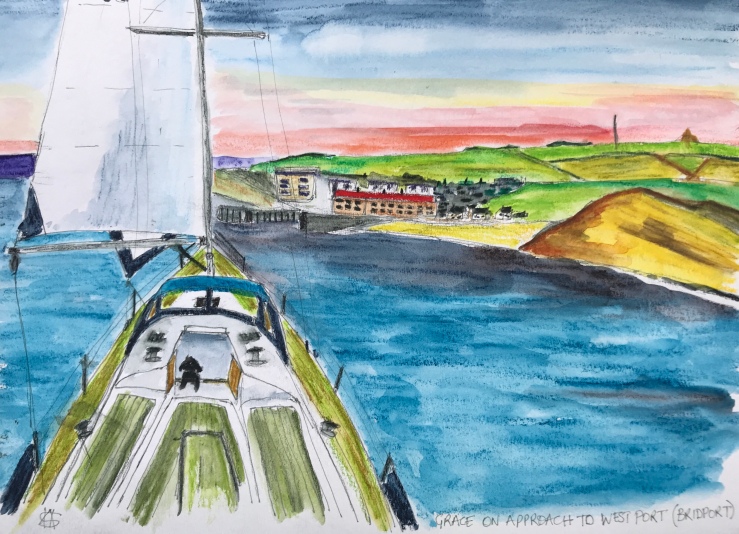 On approach to West Port

Next day was a fairly easy 30 nm beat directly across Lyme Bay towards Dartmouth. This would be our last outward bound day of the cruise before we had to turn around and sail back. We picked up the approach to the river Dart at the West Rock South Cardinal Buoy, keeping it and the Castle Ledge Buoy to starboard. Then passing up through The Range, keeping the Checkstone Buoy and Dartmouth Castle to port before mooring up at Dart Haven marina at Kingswear, seven day and approximately 180 nm sailed.

The sad thing was we never made it past Start Point (everyone who has taken an RYA course knows Start Point – it seems to be the ‘starting point’ for many of their exam exercises!). Or indeed that we did not manage to complete the trip this season…..but we will next year…..weather permitting!!!