When we set off from Kaag on Friday morning we did not expect to be in Amsterdam that night! As we had run on the motor for 32 hours and at 3.5 litres per hour, I estimated that we have used 112 litres of fuel so needed to refuel. There was nothing before Amsterdam so we had no option but to fill up at the chandler’s fuel pontoon. We only managed to take 40 litres of diesel. It was a good job as it was the most expensive fuel I have ever bought! Nothing backward here!


By 0900 we were on the waiting pontoon for the railway and road bridges at Buitenkaag to open at 0932. I had learnt my lesson and this time I waited for the green light! And sure enough not one but two large barges came through heading south.
We carry on north up the Ringvaart, passing the bridge at Lisse, then the Elsbroekerbrug, then the Hellegommerbrug at Beinsdorf. Then the bridges at Zwaanshoek and at Cruiquius (the home of the crocus).
We then went north up the Spaarne and the bridge at Schouwbroeker. We then entered the zone around Haarlem. This has 9 bridges which you have to pass through in convoy, but if you get the timing just right they open in sequence for you. We had a perfect run and had stopped at bridge 3 to pay our 10 Euro toll.

All went well and we reached the Rijnlandsluis at 1400. We pay the 3 Euro toll, we are keen to get going but the lock keeper tells us to relax as we will make the A6 bridge opening.


At 1415, the motorway slowly comes to a stop…..with the exception of the odd chancer! We are through and have one final bridge at Buitenhuizen before we enter the Noordzeekanaal towards Amsterdam. It is busy with shipping being the main route to the sea. 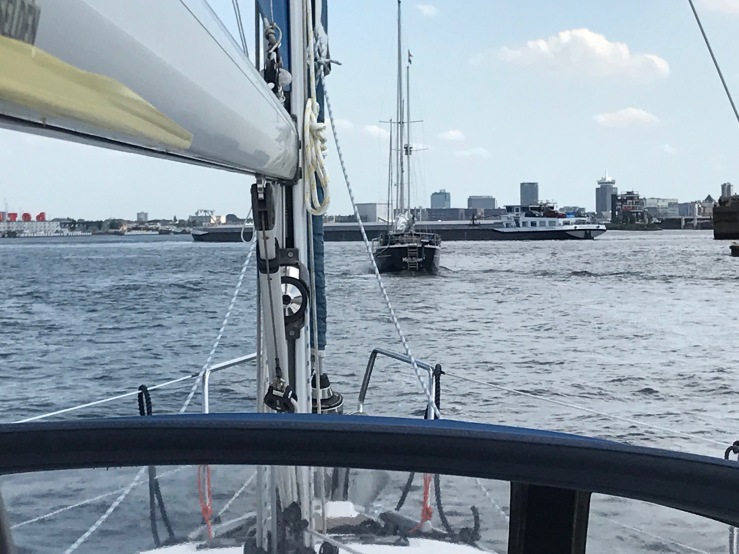 It is just 4 miles to Amsterdam before we cross the canal and enter the Amsterdam Marina. They tell us to secure up to the wavebreaker. It is 1550, we have cover 19 miles and are safely in Amsterdam, just short ferry ride from Amsterdam Centraal Station.

Grace safely moored up against the wavebreaker