The best way to describe Oland is that it is a big wave break for Kalmar! It is an island 85 miles long and for most of its length less than a couple of miles wide. Running north to south along the coast it forms the Kalmar Sund and makes the area such a nice place to sail with several good harbours. The exposed east side of Oland is open to the Baltic with only a few miserable places to stay and is only really okay to sail in fine settled weather, which as it was a bit lumpy we decided to give that part of the island a miss!

Sailing under the Oland Bridge

Our intention was to sail from Kalmar to Borgholm, the big harbour and marina on Oland, however there is a good reason why in my logbook under the destination heading it says “towards”, as we ended up in Pataholm due to so rather unhelpful winds! Pataholm is a tiny fishing village on the mainland side and is directly opposite Borgholm. It has a tortuous entry and shallow anchorage but also a Swedish Cruising Club buoy, which if free, we are allowed to use. It was. And we spent our first and very peaceful night swinging gently off the blue SXK buoy. 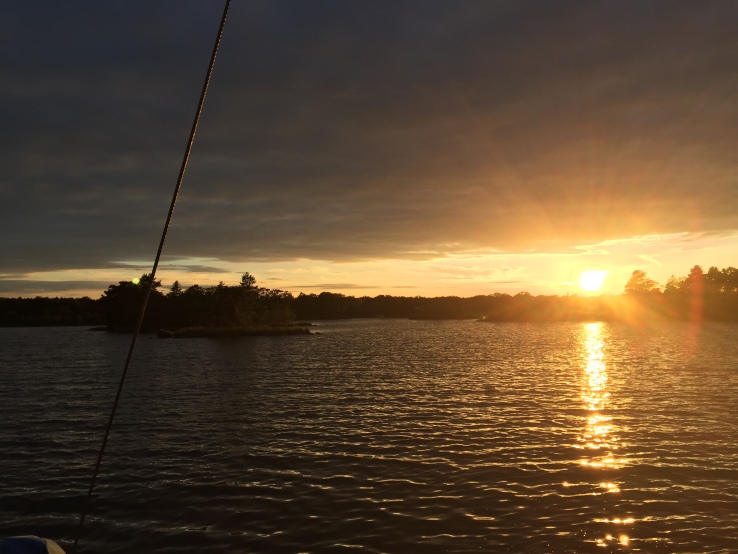 A peaceful night on an SXK buoy 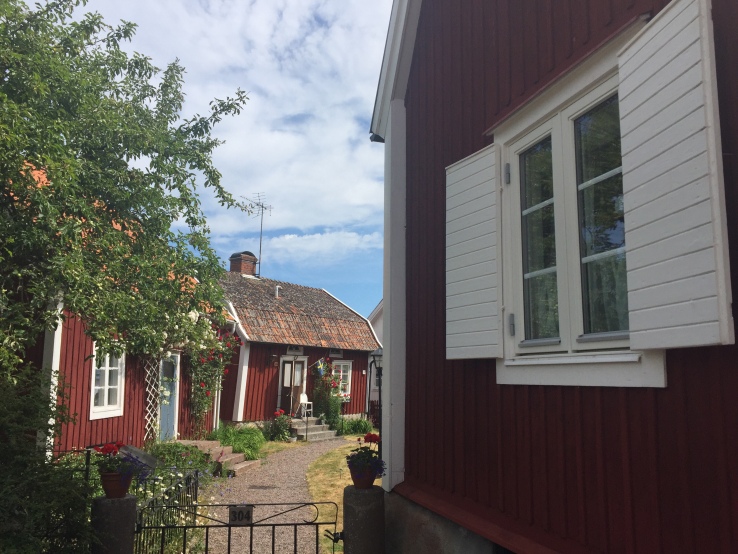 Next day we sailed the 12 sea miles across the Sund and into Borgholm, the main harbour and town on the island. The place is dominated not by the Borgholm, the large castle on the hill which ironically you can see for 20 nm up the Sund but is completely hidden from the harbour! Instead there is a rather unlovely 1970’s hotel which gives the place the feel of Rhos-on-Sea. The marina is well organised and we easily found space but sadly not next to Picklehalbe, our German ‘friend’ from Kalmar whom it would have been fun to torment further!

I was keen to go and explore Oland as in Kalmar museum they had a display on a mysterious massacre at Soby on the eastern side of the island. A whole village had been destroyed and all the inhabitants killed and left exactly where they had died. Apparently, a very unusual occurrence for the Iron Age where all dead were buried or later burnt. Your enemies might kill you for a pig and a few bowls but they would at least bury you afterwards! All the archaeologists are baffled and they have produced all sorts of completely unprovable and fanciful solutions for why this happened!

Rune Stones in the church yard at Soby

The hotel, apart from having the world’s coldest indoor swimming pool, did have car hire and we were soon driving towards Ektotop at the southern tip of the island to see the reconstruction of an Iron Age fort – one of 19 on the island and the only one to have been excavated – so plenty still to go at! Never quite having time for lunch, I did get to make Iron Age cumin bread and when eaten with wild honey it kept the ‘wolf from the door’!

Determined to get our monies worth, we then sped off to see:

The largest number of Iron Age boat burials in one place. Oland has become a bit of an Iron Age theme park, with fort reconstructions and huge graves and burial sites aplenty. We stopped and explored the first two, and it was all quite atmospheric, perched on the windswept crown of the island with far reaching views to the sea on either side. But as they say, when you have seen one ‘largest ancient burial site in Europe’ you have seen them all and one pile of stones starts to look like another! 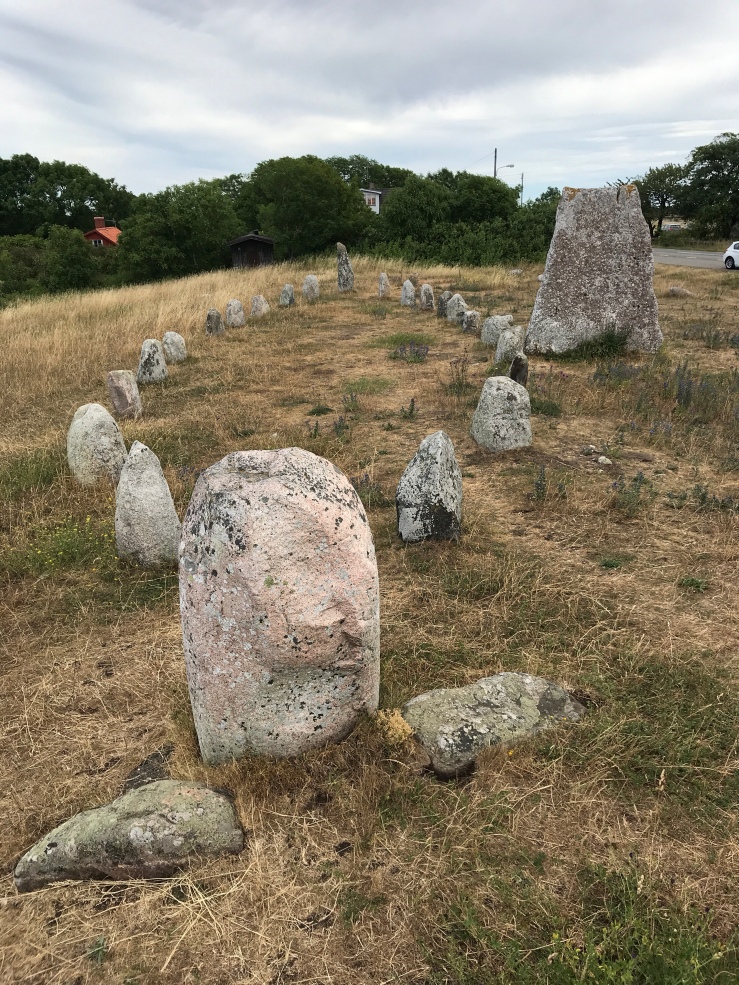 Portable windmills! In the late 1800’s there were over 2000 of these all over the island and they provided the power for harvesting – they were simply moved about the fields as they were needed. The place is still full of them, remains of them litter the roadside, they are in the corner of car parks and lay-bys, just mouldering gently to dust.

A Traditional farmstead. Then we called in on a traditional Oland farm featuring the latest in 6 room house design that every 18th century gentleman farmer aspired to! They feature 5 small comfortable and heated rooms that the family lived in with a large central, austerely furnished and unheated room to meet guests! On a winter’s evening you would not want to linger long! We knew it must get very cold as in the barns they had a fabulous collection of sleighs!

The latest in farms! 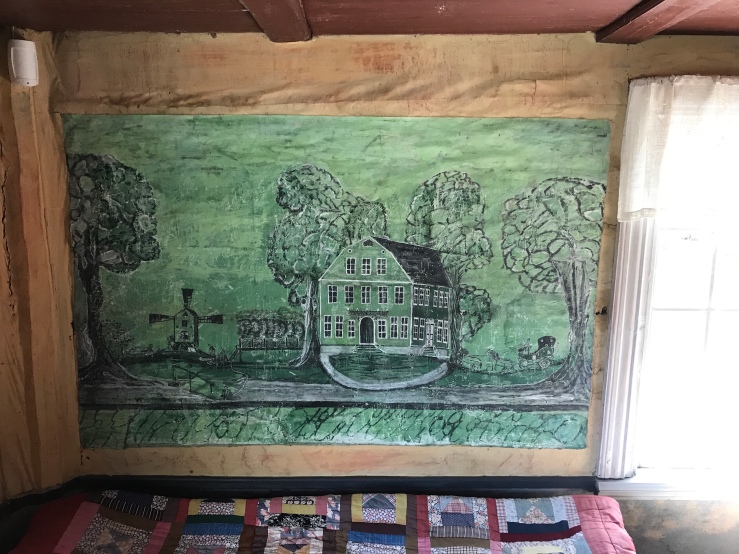 The Royal Summer Residence. On our way back, we just had time for a quick call into the Summer Palace, it is built in the early 1900s in the grounds of the Borgholm Castle for Princess Victoria who had “bad lungs”. It is used every summer and its not unusual to run into a King or Queen in the gardens. As part of a ‘corporate’ what the “Royals do for you”display, they had an interesting feature on King Carl John of Sweden and Norway. He was in fact one of Napoleon’s generals who was elected (much to his surprise as he was about to leave for a posting in the West Indies) as heir presumptive to the heirless Charles 13th. Charles had two children who died so he adopted a Danish prince who also promptly died – so on the face of it not a great gig if you fancied a long life! Carl John soon endeared himself to the locals by using his vast person fortune, amassed during some successful and lucrative military campaigns for Napoleon to prop up the disastrous Swedish economy, introducing science and agricultural colleges to try to make the country more productive. They had a display of miniature farm machinery that were sent all over the country to show farmers the latest in ploughing technology and all available at reasonable rates from Carl John farm machinery inc no doubt!

Then he had a real stroke of luck when in 1812 his former master invaded Russia and in doing so occupied an obscure and very woody part of Sweden. Suitably outraged, the Swedes signed up with the allies, GB, Russia and Prussia and a few months later what turned out to be the winning side. By way of reward, Carl John was given Mauritius, which was subsequently returned to France for £34m – a colossal sum in 1816! Carl John then lent the money to the government to pay off the national debt. It was not an altogether altruistic move as he was paid a generous rate of interest in perpetuity. It was only in 2009 that these payments stopped and the Royal family received a grant from the government.

The Borgholm. Then finally we drove down the drive to the castle, to tired to get out of the car we wound the window down as we were ‘all sightseen out’! There is not much to see. Built in 1640 it was burnt down in 1806 and is now used as an open air concert venue, mainly for hasbeen pop stars of the 1980s and 1990s.

The only thing we had missed on our day out was Scandinavia’s only 8 storey windmill and mini golf centre. But no worries we would pick that up when we visit Sandvik tomorrow! 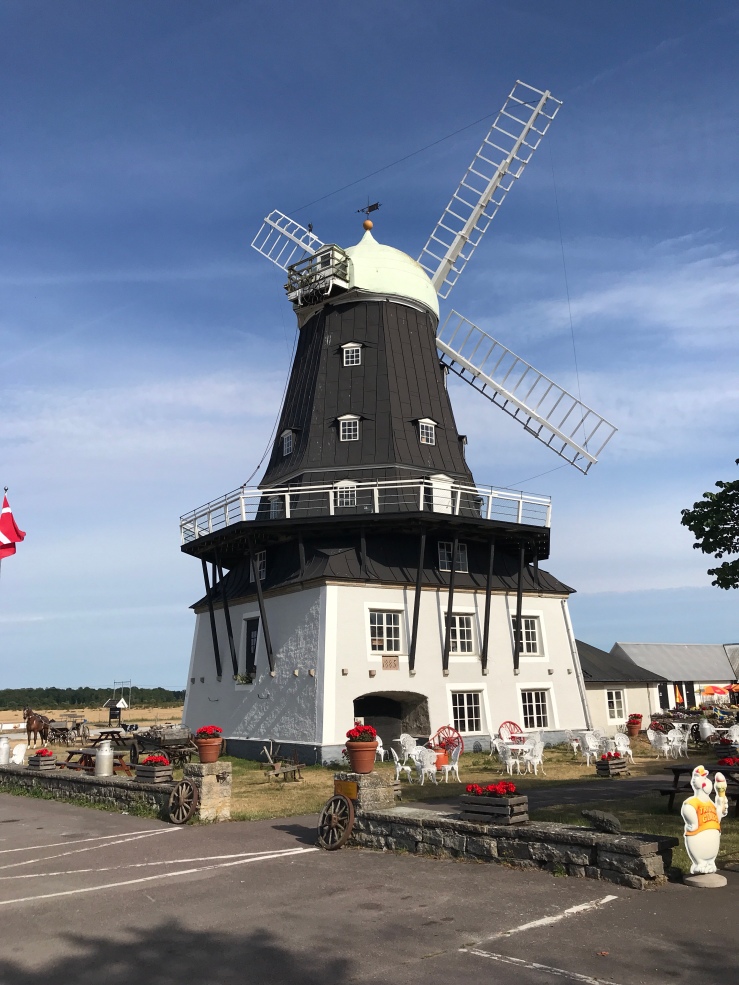