We had a storming sail up the Kalmar Sund – reefed most of the way we cover 20 nm in less than 3.5 hours “door to door”. That is an incredible (for Grace) 5.7 knots! We left Bergvara at 7 am to beat the 25 knot winds that were forecast for that afternoon and not wishing to be trapped in Bergvara.

A record run up the Kalmar Sund

We had exhausted the delights of the region within about 2 hours. That included a bike ride to the next ‘town’ through some amazingly fragrant pine woods – where the air was heavy with the scent of pine disinfectant! 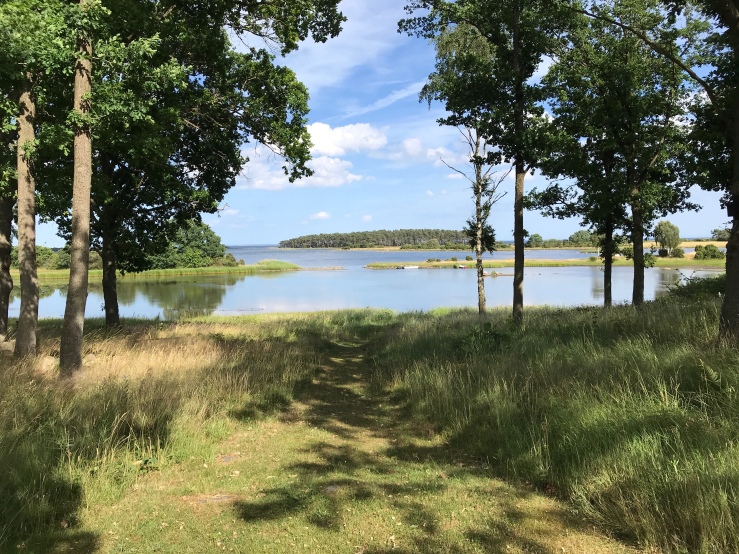 Exhausting the delights of Bergvara!

We got some fresh milk and supplies but decided to call into the rather cosy looking cafe and bakery opposite the supermarket. We were tucking into some excellent cakes and possibly the best coffee I have tasted since arriving in Sweden. I was helping myself to more of this delicious coffee from the seemingly limitless supplies available from a large copper urn when a man on the next table said; ‘your English, we don’t often here that here!’ His accent was slightly odd and i assumed that he was a Swede practicing his English, it turned out he was from Norfolk which explained a lot! He had left England 30 years ago to teach English during the summer and had somehow forgotten to return home! 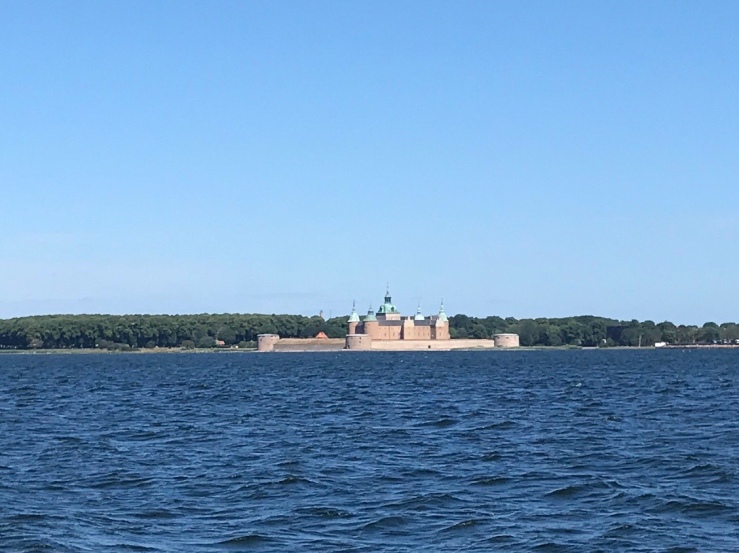 Kalmar is a particularly easy place to find, at the entrance to the harbour is a 150 m long sign that says ‘Kalmar’! All very reassuring and a bit of a relief! At Kalmar, the Sund becomes very narrow and the channel rocky. It is easy to see why the city developed such a strategic importance as the ‘gateway’ across the Sund itself. No wonder it has a large and impressive castle. Ships not wanting to pass fortifications at Kalmar would have to sail all the way round the outside of Oland (the island that forms the other side of the Sund). A lengthy and inhospitable journey out into the Baltic Sea.

We are in the right place at least!

The channel itself into Kalmar is well buoyed, with a big lighthouse to aim for! This was our turn point for the main harbour but as we did so in the strong wind we were met with a dust storm from a ship loading grain, we just had to sail in blind and trust to luck that we did not meet a boat coming out! Turning sharply to starboard we found ourselves in the guest marina. We had plenty of space to choose from but unfortunately I chose a berth next to a German yacht strangely called ‘Picklehalbe’. He had a complete fit at my ‘kamikaze’ mooring technique and ran around his yacht hanging not just fenders but also fender mats as well and yelling that we were too close but also that he did not understand why we were next to him. Grace, although shorter than his boat towered over him and as the wind caught us we would swing towards him, he would tut loudly. It was all quite entertaining as there was nothing to be done other than enjoy his obvious discomfort by our presence! At least we paid our harbour dues, which is more than I can say for some of our close neighbours!

We reached Kalmar just before the midsummer festival. Everyone we spoke to used midsummer as an excuse for everything and always said with a chuckle!

“It is wet and windy, it is always like that at midsummer”

“The shops are all closed, it is always like that at midsummer”

“The harbour master is away, it is always like that at midsummer”

Midsummers eve started very quietly, Kalmar was deserted, no cars, no trains, no buses, no people and no signs of madness…yet! Only the COOP was open! Asking in the tourist office where all the madness was happening the girls in the office laughed, marked a couple of spots on the map where we should go for midsummer ceremonies and the specific time, 1300. I was all excited, what was going to happen, what was going to happen? Animal sacrifices? Naked dancing and drinking strong alcohol out of bulls horns? Setting off on some borrowed bikes for Stenso we looked forward to some of the fabled Swedish madness!

Not much Midsummer madness at Stenso

I have to admit that I had not set my expectations very high, or indeed high at all as I had been questioning people (in now what I realise must have been a bit creepy!) that I met in the COOP, the Chandlery and various cafes what people got up to and they all said exactly the same…..Oh yes we Swedes go pretty crazy at midsummer, but I’m a bit old for that now so we’ll go to our favourite restaurant on Oland for lunch then have a barbecue in the evening…..Wild stuff, young or old the answer was the same. So unless ‘barbecue’ is a euphemism for something altogether more sinister then the only thing that was going to get sacrificed would be a lot of sausages!

So arriving in Stenso at the allotted time the place was deserted, except for the occasional person with a garland in their hair. They would then disappear and another reappear! So following their general direction we arrive at a holiday camp! But there, in front of the cafe is a sort of hoopy cross covered in flowers with families holding hands and singing favourite nursery rhymes as they dance around it! All good fun to watch in the sunshine with a drink!

The other thing Stenso is famous for is that it was the place where in 1520 Gustav Vasa landed back in Sweden after a period of exile and start of Sweden’s journey to independence from Denmark. There is a big stone kern to mark the spot and just out of sight of Kalmar Castle where he landed. Lots of historic and not so historic places were marked in the Great Depression of the late 1920’s as part of the government’s unemployed alleviation programme. Gustav Vasa declined the invitation to attend the coronation of Christian 2nd aka Christian the Tyrant (the clue is in the name!) in Stockholm in November 1520. Christian was Danish king who naturally wanted a united Denmark and Sweden. This was not universally popular with many Swedish nobles and there had been much fighting before the ‘Kalmar Union’ was eventually signed.

Christian announced that he was prepared to ‘bury the hatchet’ and everyone should come and celebrate his coronation with a 3 day feast. Little did the Swedish nobles know just how literally he intended to bury the hatchet and 83 of the most troubling Swedes were beheaded including Gustav’s own father! The Stockholm bloodbath did Christian little good as within 3 years Gustav Vasa became King Gustav 1st of Sweden!

The Slott is very impressive, especially from the sea, which I guess is where it was always meant to be approached from. It had had been modernised to embrace new technologies such as cannons and gunpowder and although it had been besieged a few times it never fell through being overrun. In fact you can still see cannon balls embedded in the walls from the last time someone had a go! Lavishly appointed, the castle has beautiful ceilings, decorative woodwork and painted walls but as the Swedish Royal family seemed to have spent all their money on building the place they had to use furniture captured from the Danes from Helsingor Castle! So, to make sure that any unlucky ‘spirits’ that might lerk within and cause upset were safely allowed to escape, all the human sculptures on the queen’s ‘new’ bed had all their noses removed! Apparently the castle still is in defensive use and there are some ‘secret’ (so secret that even I found out about them!) tunnels out to a island in the Sund from where torpedoes would be launched if the Russians had invaded during the Cold War.

Cannon balls embedded in the walls! 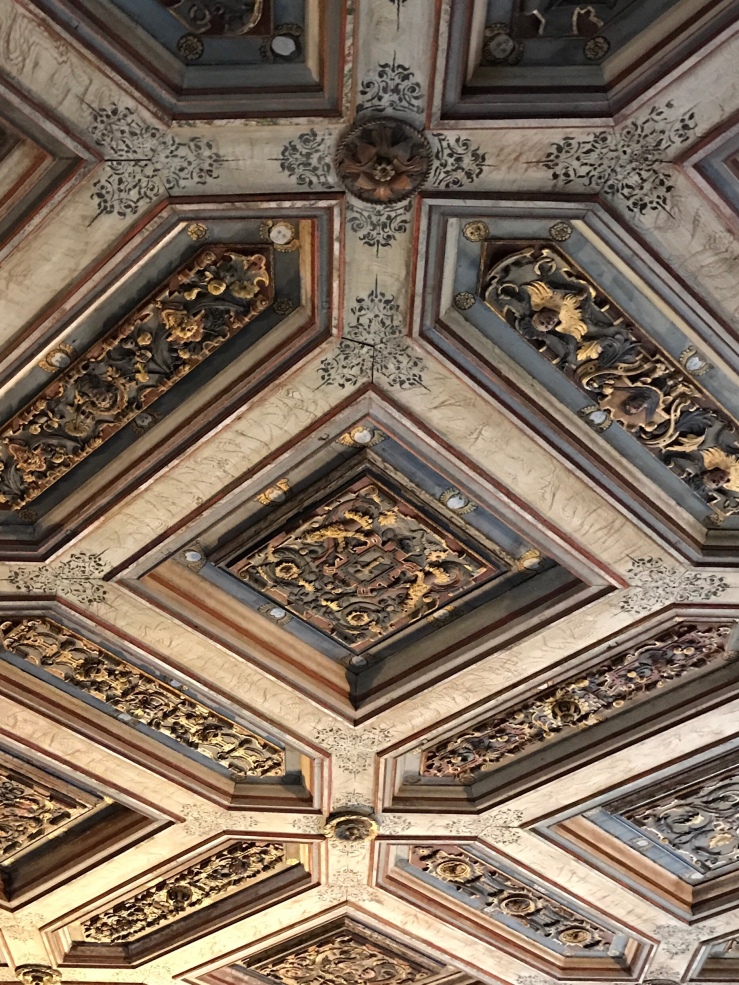 Nose-less to let the spirits escape!

After sheltering from the rain with coffee and a cake in the Dammgatan, a lovely garden of a private house we went on to see the remains of the Kronan.

Coffee out of the rain!

The Wasa in Stockholm is much better known but the artefacts from the Kronan are fascinating as it shows a fully equipped fighting ship with everything from wine flasks, musical instruments, cheeses and the pile of gold coins that was the admirals pay whereas the Wasa was on her maiden voyage and not kitted out! The Kronan was the biggest ship in the Swedish Navy and sank in battle with the Danes when there was an argument about which way to turn (a common problem when sailing!), flooding the lower gun deck causing the ship to capsize and then explode! It was the only ship in the navy to have all bronze cannons, bronze guns were the ‘ultimate’ weapon of the time and they can from all over the place including the Danes and some were already 100 years old when they were installed on the Kronan! Bronze cannons being so very very expensive that after the ship sank, 60 were recovered using diving bells over about 20 years. By then English foundries in West Sussex were making better quality cast iron cannons, much quicker and cheaper, making bronze obsolete. 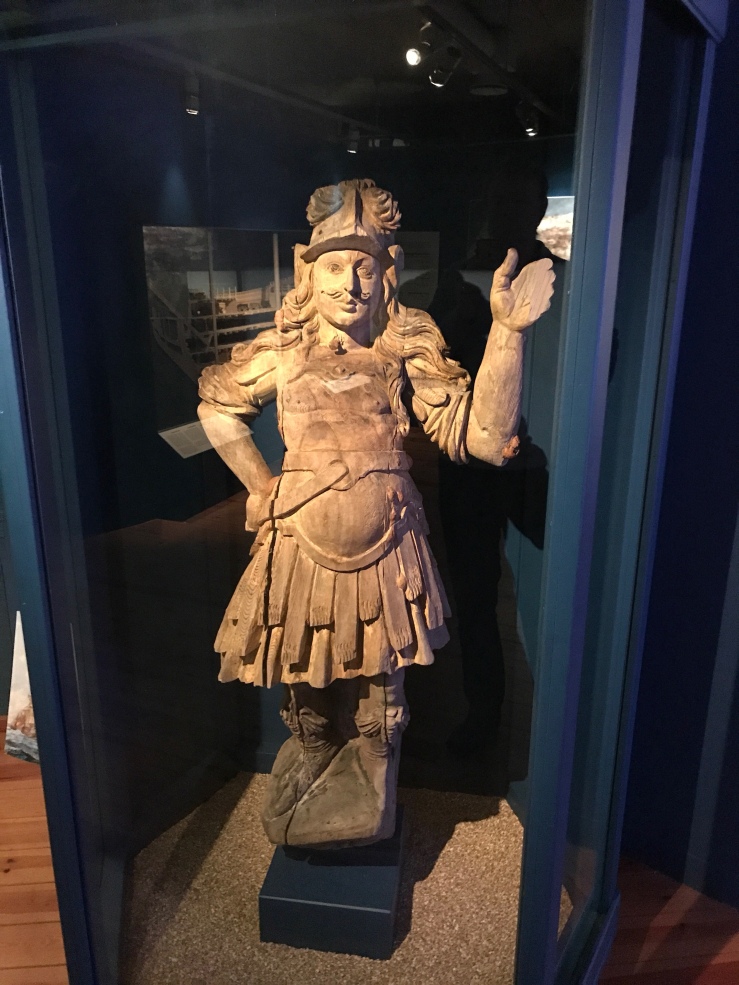 A rather cheery King Gustav figurehead!

A set of silver flasks – found still full of 64% proof spirit! No System Bolaget then!

Just some of the beautifully preserved items – they even found pots full of cheese, although it looked a bit past its best!

1 thought on “Kalmar, breaking our speed record and the German who just does not understand the English and mid summer ‘madness’!”