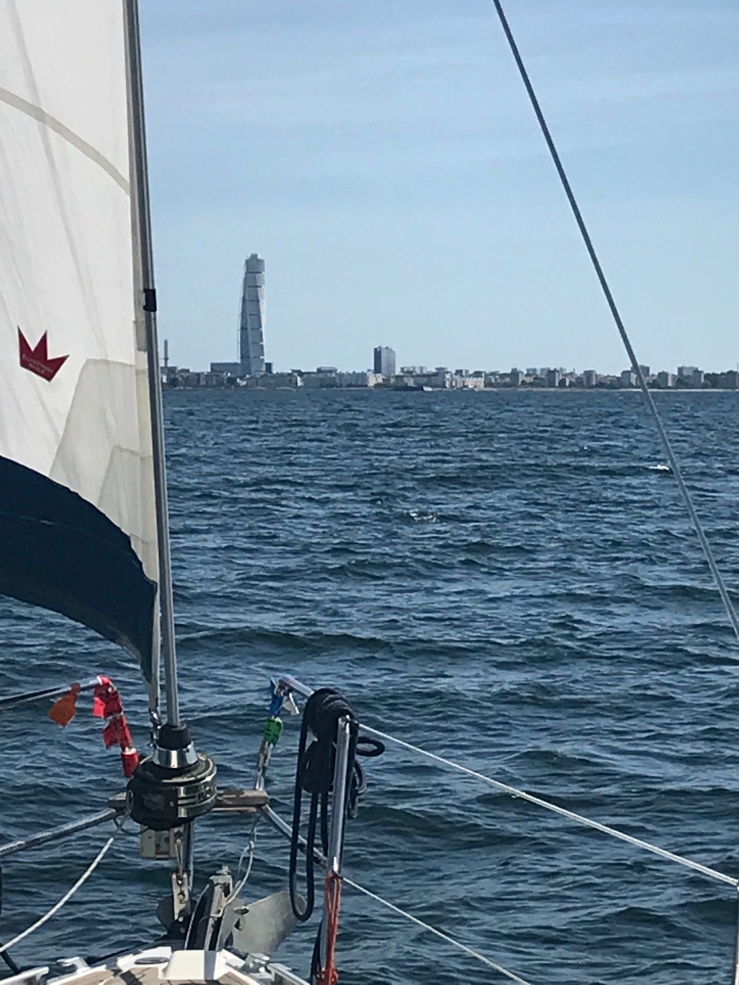 The turning torso, can be seen for miles on the approach to Malmo

After remembering to close the bridge at Landskrona as we left we were soon back out in the Oresund at Ven and heading south, with a light northerly and a 2 knot current we were soon flying along with our sails goose winged. Our next stop was to be Limn Hamn, the large marina on the outskirts of Malmo and we covered the 21 nm very quickly. Malmo’s only tower block, the Turning Torso can be seen for miles and makes a handy reference point. Passing close by the waterfront and on south for 2 nm we entered the marina that lies in the shadow of the Oresund Bridge. It’s wide fairway and plentiful berths made it a joy as did the rather nice bar! The bar was much appreciated as the entrance itself was only 30 feet wide with rocks and a sandbar to swerve between! The only other drawback was the Mozzies, and our first introduction to Swedish insects! 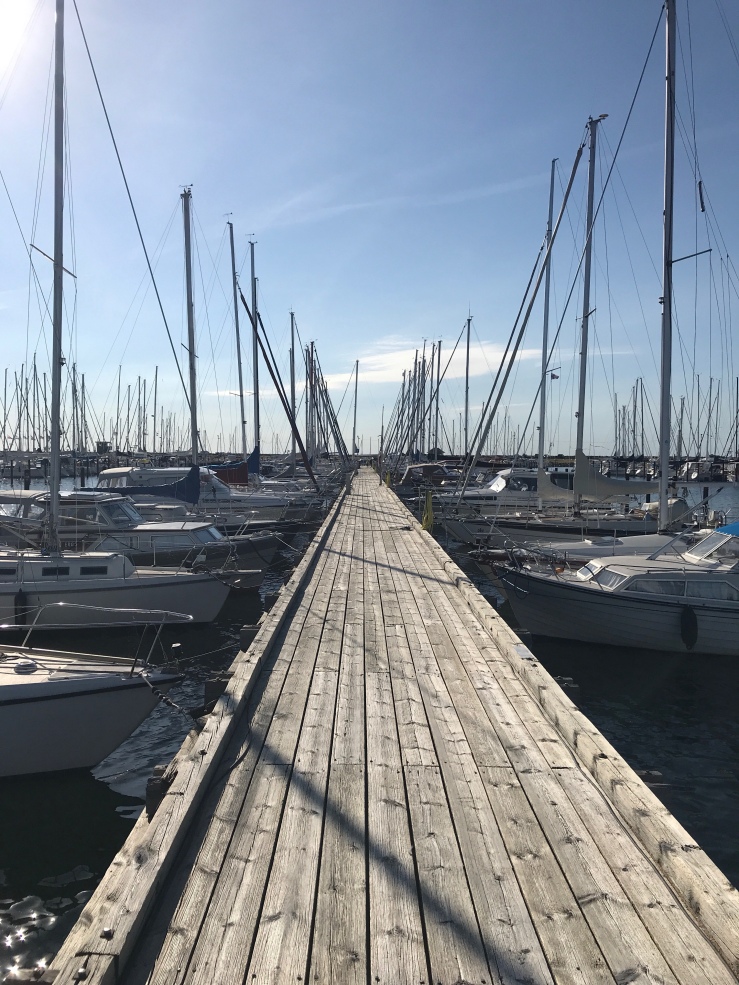 At Limn Hamn, super wide fairway but with mad mozzies around the pontoons!

Our next leg was only 14 nm down to Hollviken at the head of the Falsterbo Canal. Taking the small boat channel we motored under ‘The Bridge’ of Scandi-noir TV fame, conversely all the Swedes who left when we did, were all under sail, heading straight through main shipping span, totally oblivious to the approaching ships. We felt much happier with our choice. 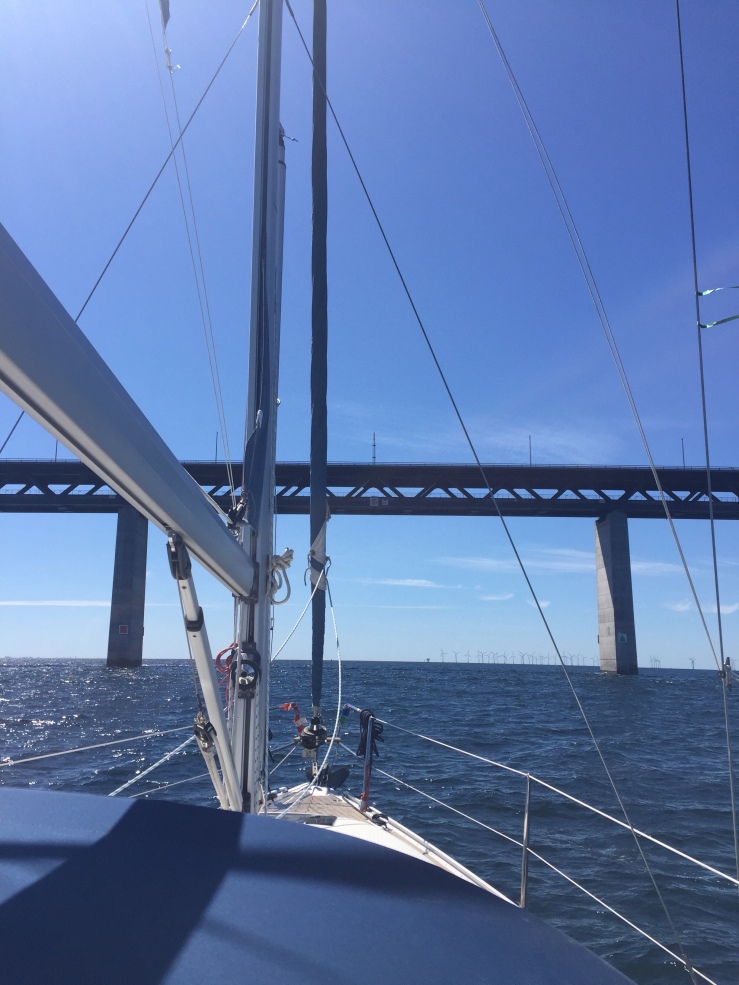 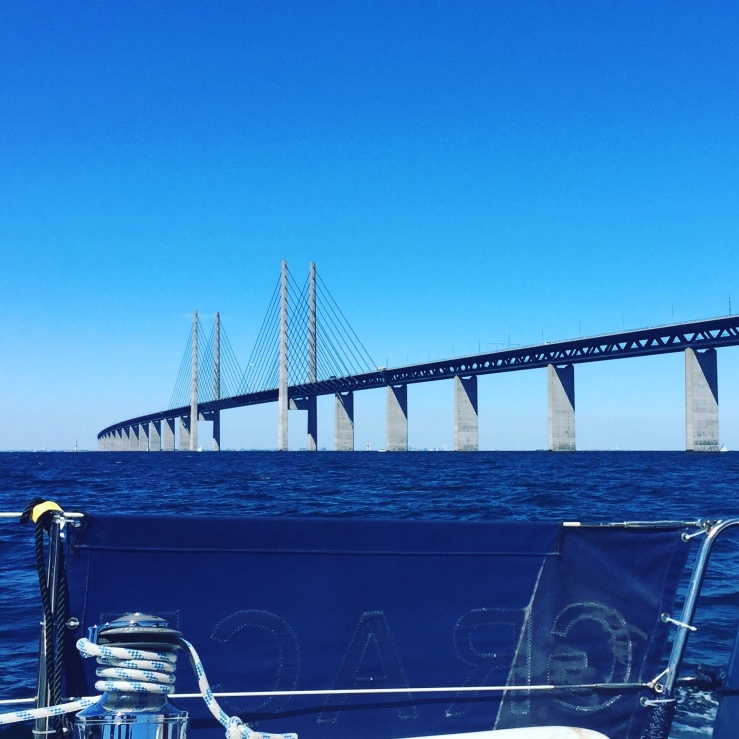 The Bridge of Scandi TV fame!

Then with a strong F4 westerly behind us, we reached down towards the Falsterbo canal. The canal was finished in 1941 as a way of coastal shipping being able to avoid the large German minefields layed off the reefs at Falsterbo Rev. Although it is only 1 mile long, its construction had been long discussed and a few halfhearted efforts to dig the thing had been made over about 200 years! Today it is only used by pleasure craft as a shortcut to the Baltic and neatly avoids the reefs and traffic separation scheme on the peninsula, saving 25 miles into the bargain. The canal creates a wide gap in the trees that can be seen for miles and that also seems to funnels the wind directly up it. We had to take in the sails and motor down the approach to Hollviken, which is a rather haphazard marina perched in amongst the remains of the old wharfs and jetties. It does however makes a handy stopping off point to pick up Alan, one of Anne’s brothers who had just landed in Copenhagen. There were several other boats that had clearly been left while their owners were away. 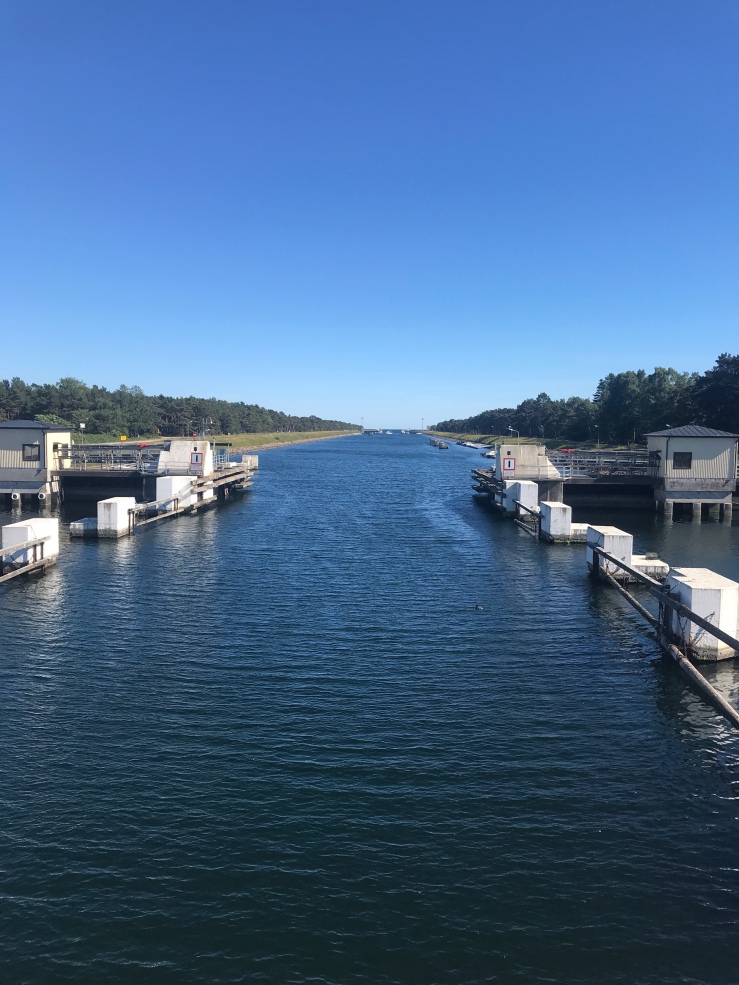 Next morning, we were through the canal and then with Alan at the helm we were out into the Baltic proper and on our way to Gislovs Lage. Having an extra person to help with the sailing meant we made rapid progress along the Swedish south coast, that and the favourable if strong winds made their contribution too! 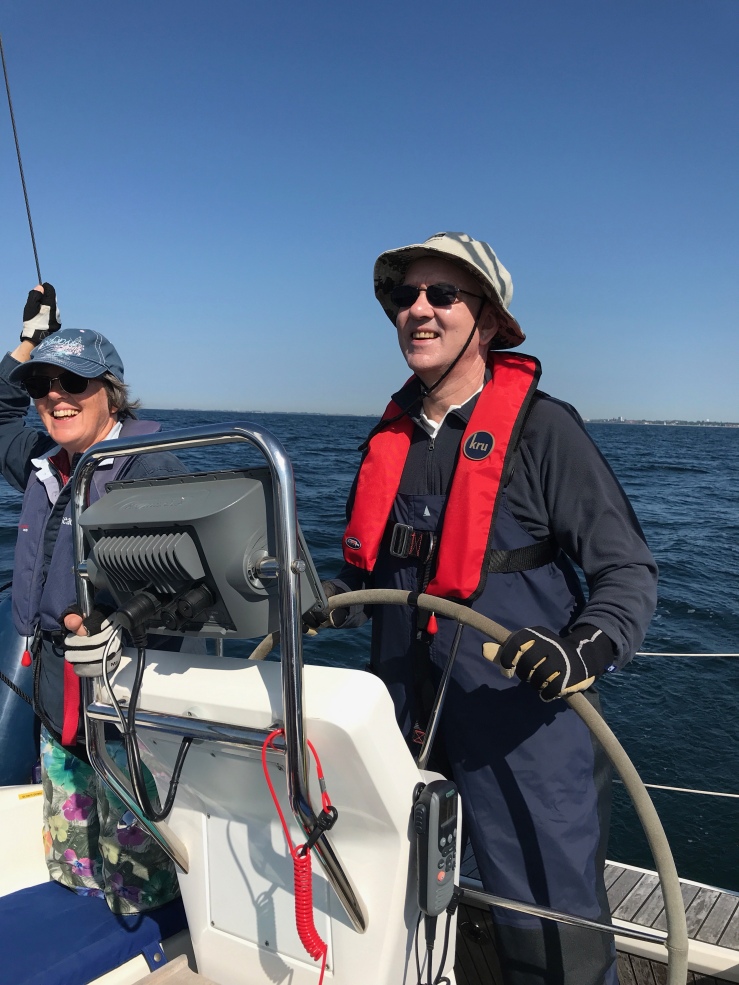 We arrived in Gislovs Lage, in a rising force 4 with a deep swell having tacked along the line of the Baltic Cable, which switches electricity between Sweden and Germany and also kicks your compass out by about 10 degrees! 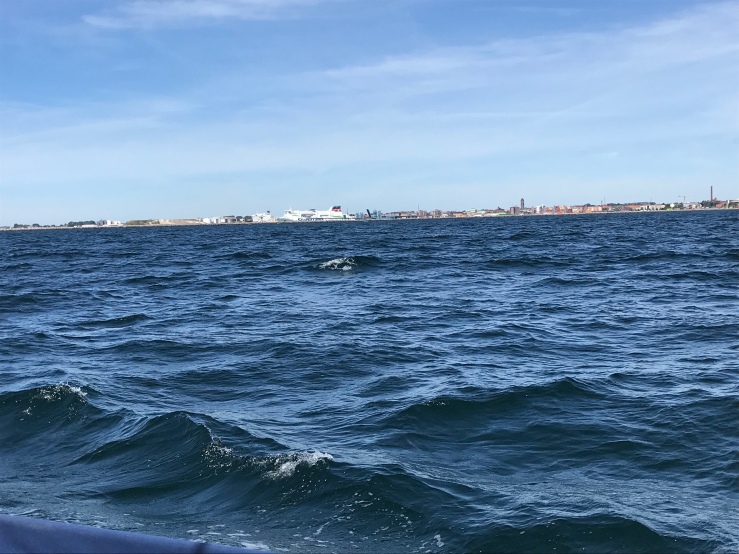 Trelleborg is closed to yachts due to the ferries

It had been a lovely sail and entering the still of the inner harbour we easily picked up a stern buoy and moored halfway along the leading pontoon in about 1.6 m of water. Generally water levels in the Baltic are about 20 cm below normal and we gently swished through the mud on the bottom. The place was very peaceful if a trifle smelly where the seaweed had become exposed and died due to the low water level (although apparently not as bad as Smygehamn which even has a warning in the pilot books about its smell!). Trelleborg about 2 miles to the west is the nearest town but yachts are not allowed to enter due to the very busy ferry services to Poland and Germany. 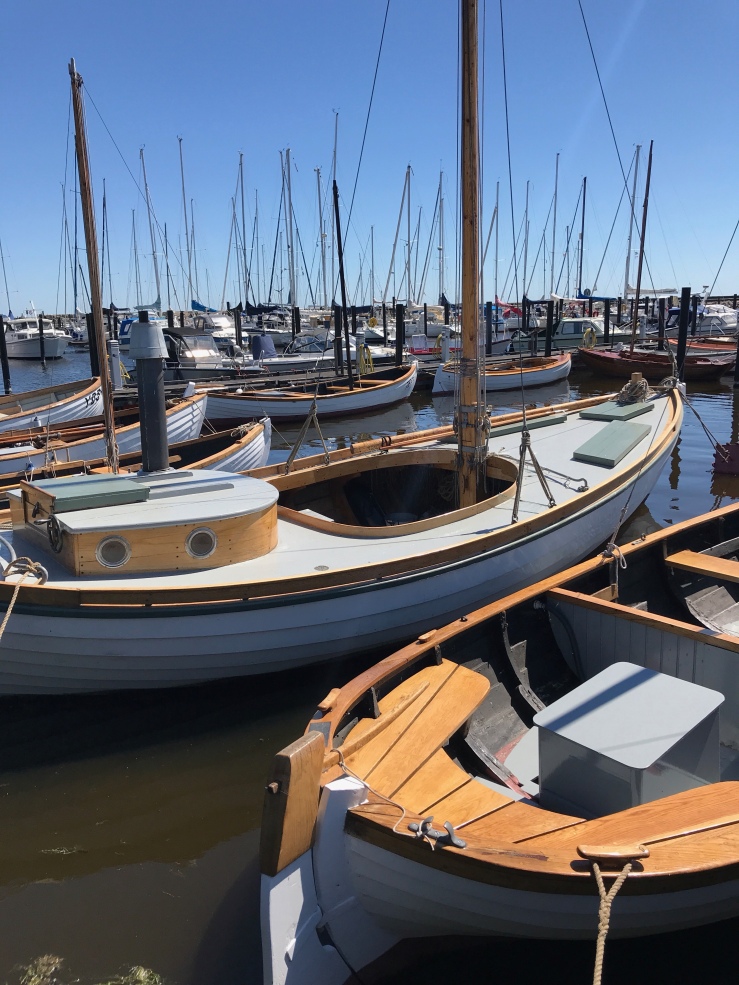 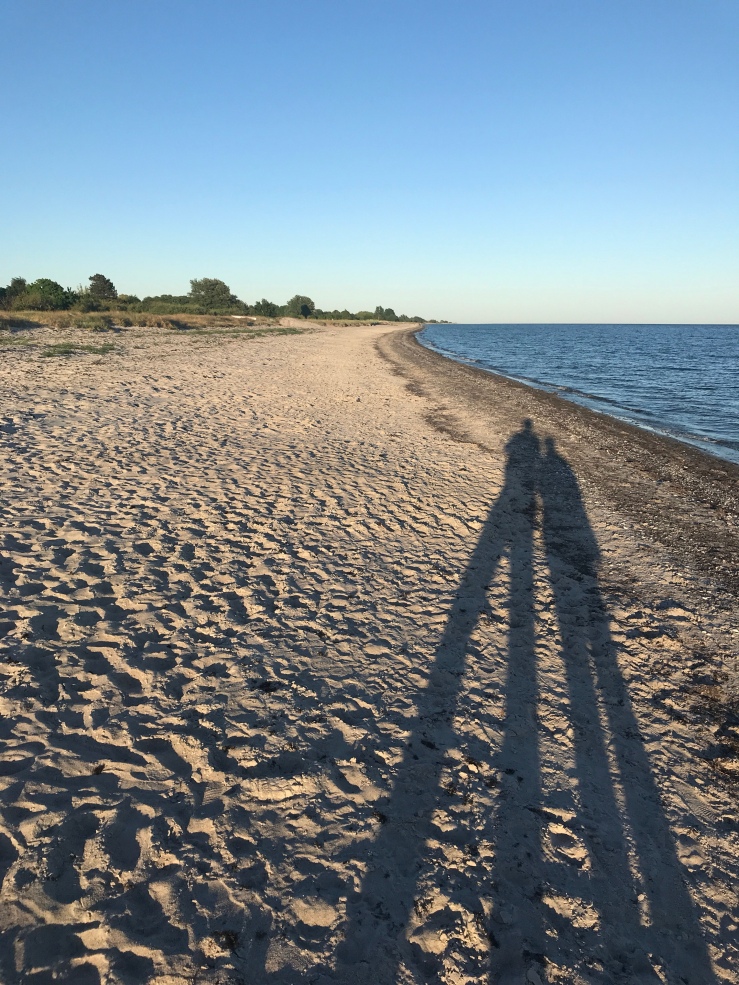 As we were leaving to explore ‘town’, a large and well polished German yacht came in beside us and we assisted by taking the mooring lines. It is always a relief when someone is there to do it for you, although in most cases if they are coming in next to you then self interest plays a massive part…….a wayward bow with a large anchor adorning its tip can work wonders on your top sides as it scrunches past! However what caught our attention was the couple on board, mein Herr was barking instructions to an elderly Frau who was rushing around the deck in circles tidying ropes. But the thing that most impressed me was the knitted fender covers! I did suggest it to Anne but her response was rather brief and not at all positive! 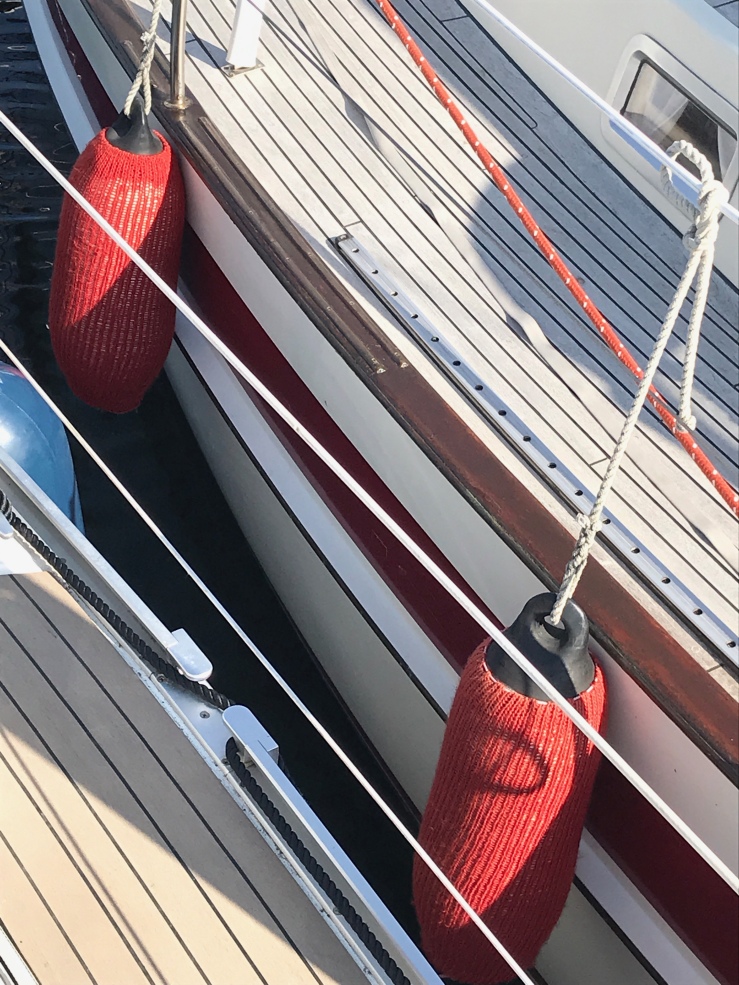 Knitted fender covers would make a lovely addition to Grace!

A trip to town was essential as we had to try out the System Bolaget, the state office licence and the only place to buy booze (other than a bar) over 3.5 % proof! The way it had been billed at this year’s Cruising Association Baltic Seminar, I had been expecting some sort of forbidding yet back alley finger wagging institution where you had to prove your age and where crowds of teetotal puritans would jeer and mob you as you slunk out of the door with your single can allowance of strong lager wrapped in brown paper! No quite the contrary, it was all a bit smart in a Waitrose sort of way! Although there was a tramp begging on the doorstep which made me reflect for a moment on whether I really wanted alcohol and for me to conclude that I really did! 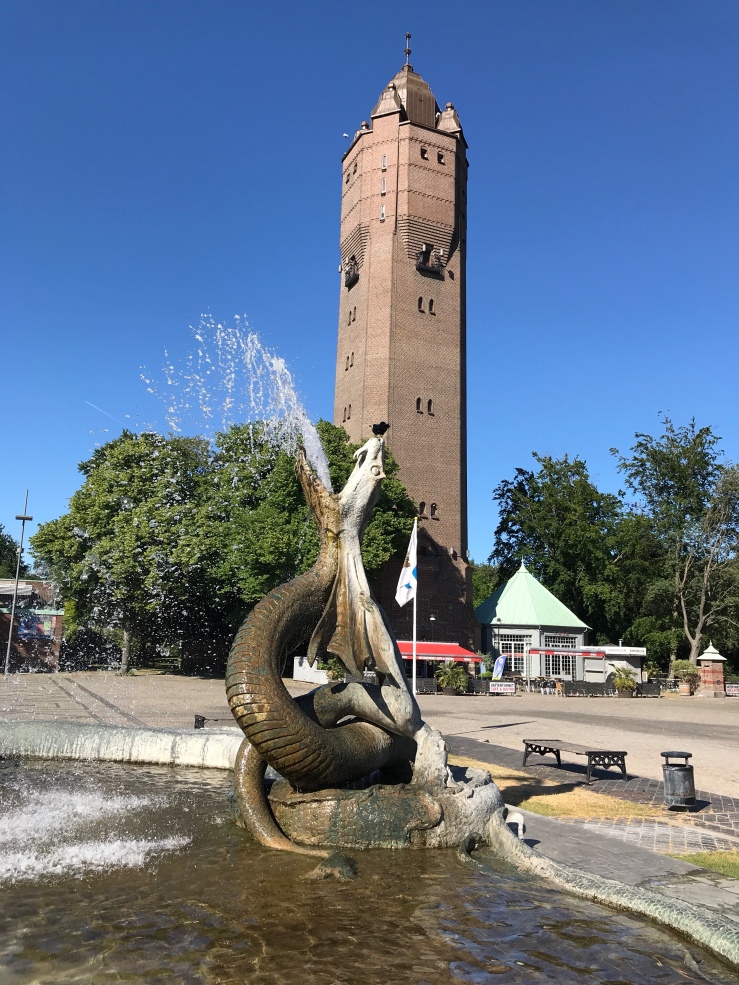 Trelleborg water tower and something to use the water on!

The next and probably more important errand was to buy a new kettle. Our £3 Asda kettle which had served us well for 18 months finally melted the adapter plug (our boat has German plug sockets) and so it was time to buy a new less powerful one. The only one I could find was a very smart, eye watering expensive but almost total useless Bodum Kettle! It has the right sort of plug, a low 1.3 kW power draw but won’t switch off when boiling if anywhere near full. Top tip! Don’t buy one!

4 thoughts on “A Turning Torso, The bridge, the Baltic Sea at last and System Bolaget!”