Saturday 29th July and we make a very lively exit from Enkhuizen before the weather turns a bit windy! Trying to pick our moment to untie from the mooring when there was a lull in the wind is of course hopeless and we time it just when the wind is building to its strongest! At least the wind is head on and there is plenty of it to blow us backwards out of the box berth! Oh well, there are times when you have just got to go for it and this is one of them! I give Grace a good burst of full astern and full port rudder! We surge back but Grace is always slow to respond to the helm astern but she does starts to turn and we sweep round just missing the opposite mooring posts and boat sterns! Beautifully done, just like a pro.

We still have plenty of speed astern – 5knots as we sweep into the fairway! Dead stop! Dead slow ahead and we exit the Marina through a flurry of ferries, barges and yachts which have take that very moment to appear from nowhere.

We start our crossing of the IJsselmeer on a bearing of 050 towards the channel buoys marking the approach to Stavoren. After about 8 miles we pick up the first of the green buoys. It has been really nice to sail again after a few days of motoring in the confines of the canals. It’s a Force 4 and on our mainsail alone we have be making 4 to 5 knots in what has been a bit of a choppy sea. A course change to 030 takes us down the channel, keeping green buoys to starboard for about 4 miles before taking in our mainsail just before the entry to the Sluis at Stavoren.

It is 1330 and too early to stop so we press on, planning to stop at a nice hotel which gives you a mooring providing you stop for dinner. It’s a couple of miles past Stavoren but timing should be right by the time we have done the bridges. 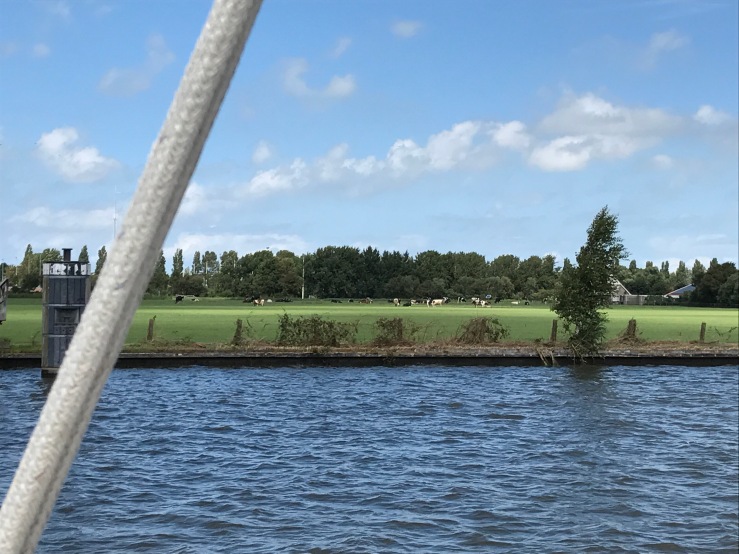 Our first Friesian cows in Friesland !

Everything really is going our way! We have no delays at the bridges but it is really busy. We have never seen so many boats on the canals. They are everywhere streaming in all directions! 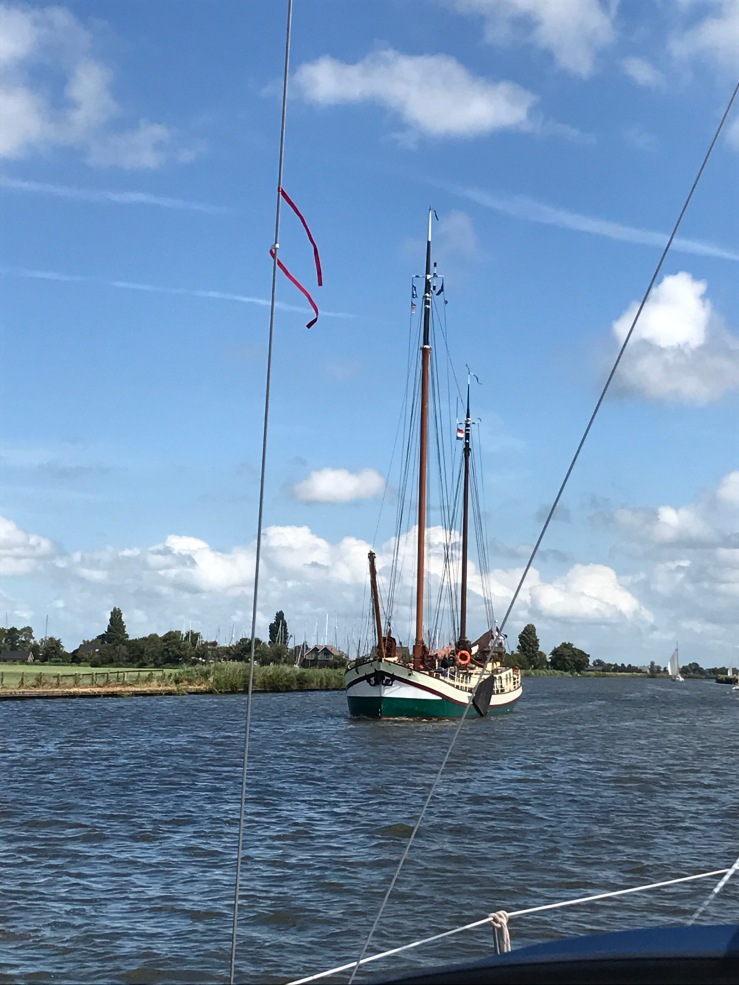 On the Johan Frisko Kanaal

Before we realise it we are through the Johan Frisko Canal and have rejoined the main Staande Mastroute from Lemmer in the Princess Margaret Canal. 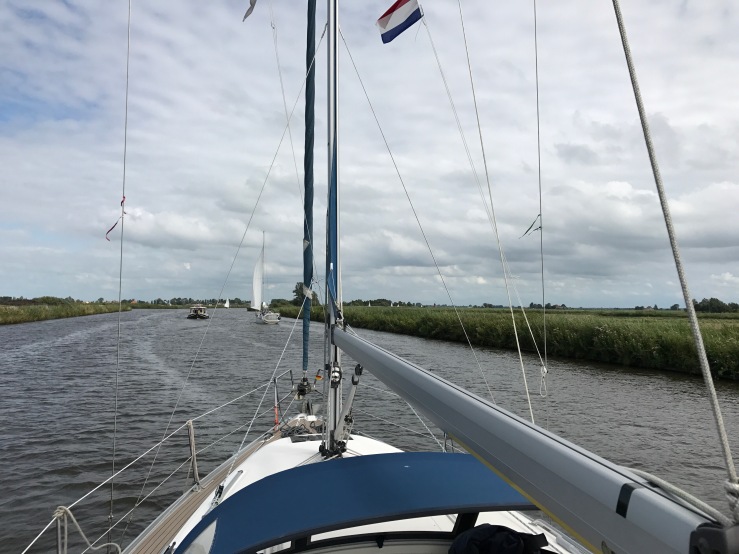 After crossing several large lakes we are at the start of the Sneekermeer. It is 1730, we have had a great sail but are tired and need to find somewhere to stop. Sneek looks a good bet. You can moor up in the street and they have space for 250 yachts. It an incredible feeling sailing into the centre of town and mooring up against a wall! A few minutes later the harbour master turns up on a bike and we pay him. Job done, free electricity, wifi, water and showers!

Moored up in Sneek

An eccentric woman turns up from the Woman on Barges association and sells me a burgee for 15€ and map of ‘free’ moorings around Friesland. It seems right to support what they are doing and I pay up willingly…….this proves to be a very handy investment! 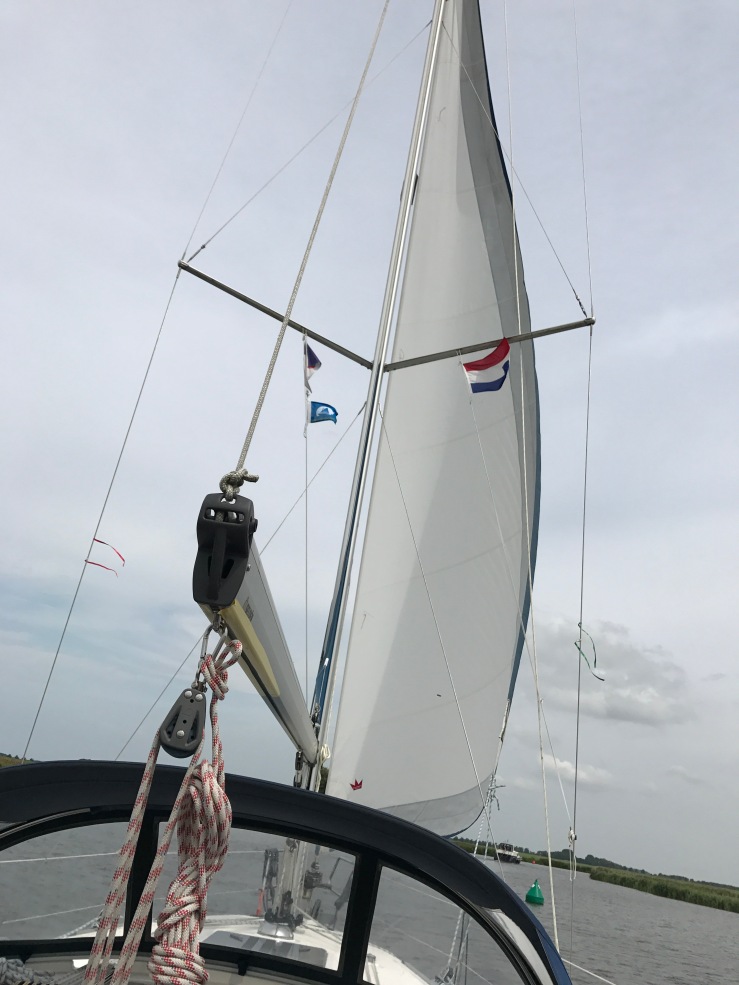 Sneek is not the biggest town but we have a nice supper in De Walrus which seems to be the only place with any life and it is all rather good! 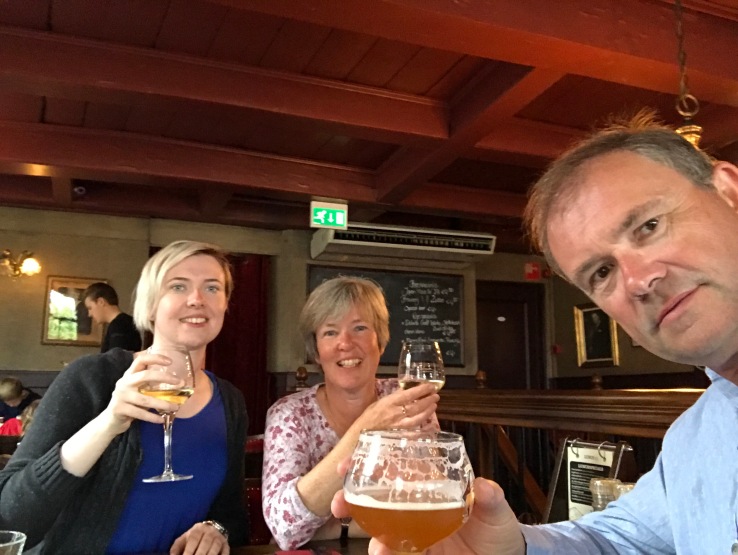 Oh and the record, we covered 27 miles and 3 pages in our ANWB wateratlas! The furthest we have managed in one day on the canals!