It is 0600 on Tuesday morning, we are both awake and nervous with anticipation about our first Channel crossing. The passage plan we completed last night is clear in my mind, I must have read it and reread it a dozen times! We forget to have breakfast in our hurry to get on with it! In Dover, the weather is lovely but I ignore the foghorn that is sounding in my rush to get Grace ready for sea. The fuel pontoon is our first stop and fill up with 70 litres of red derv and make sure I pay the full duty option. (More about this later!)

On leaving the fuel pontoon (of course the world and his wife arrive in the form of a large work boat for the new Marina and impatiently buzzes about as I am trying to extract myself backwards out of a tight spot and into the main fairway!) I radio port control on channel 74 and ask for permission to leave towards the east, he routes me across the southern breakwater and out of the eastern entrance, this is normally reserved for ferries and he tells a P&O to wait while I clear out to the north at the grand speed 4.5 knots. 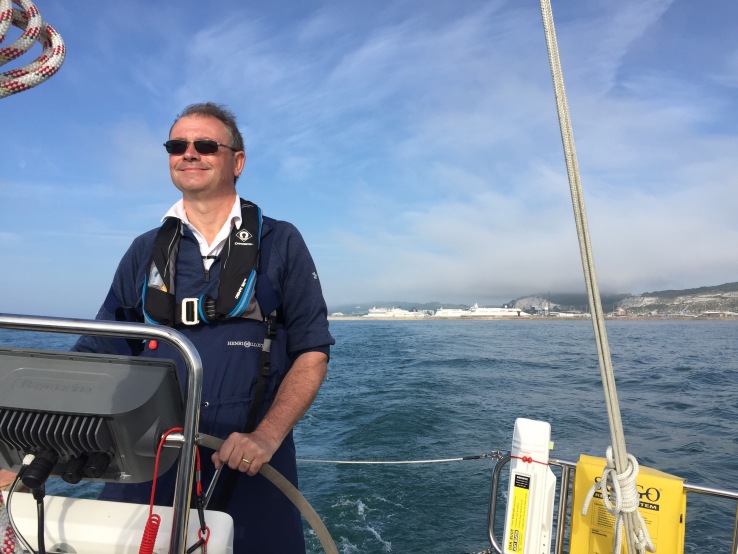 Leaving Dover through the eastern entrance.

We are following a recommended route on the chart, fortunately we had programmed the waypoints in to our Raymarine C series chart plotter……after spending a happy half an hour on Monday evening trying to figure how to do it! 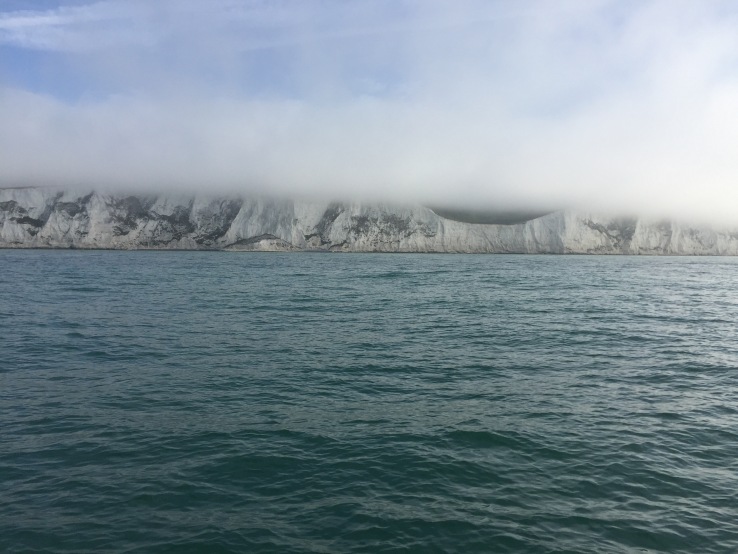 Fog over the White Cliffs

My log says we left Dover at 0730 on a bearing of 080 towards our first waypoint, which is south of the South Goodwin cardinal and it is at this point that the fog which up to now has been more cloud than anything, descends into thick fog, giving a visibility of less than 200 metres. I assemble our foghorn and fish out the two white ‘ship scarer’ flares from deep in the port locker! It is amazing how far I can reach when I really want to! The strong tidal stream, of about 3.1 knots pushes us to the north of the South Goodwin buoy. We are pleased to see it emerge from the gloom to starboard. 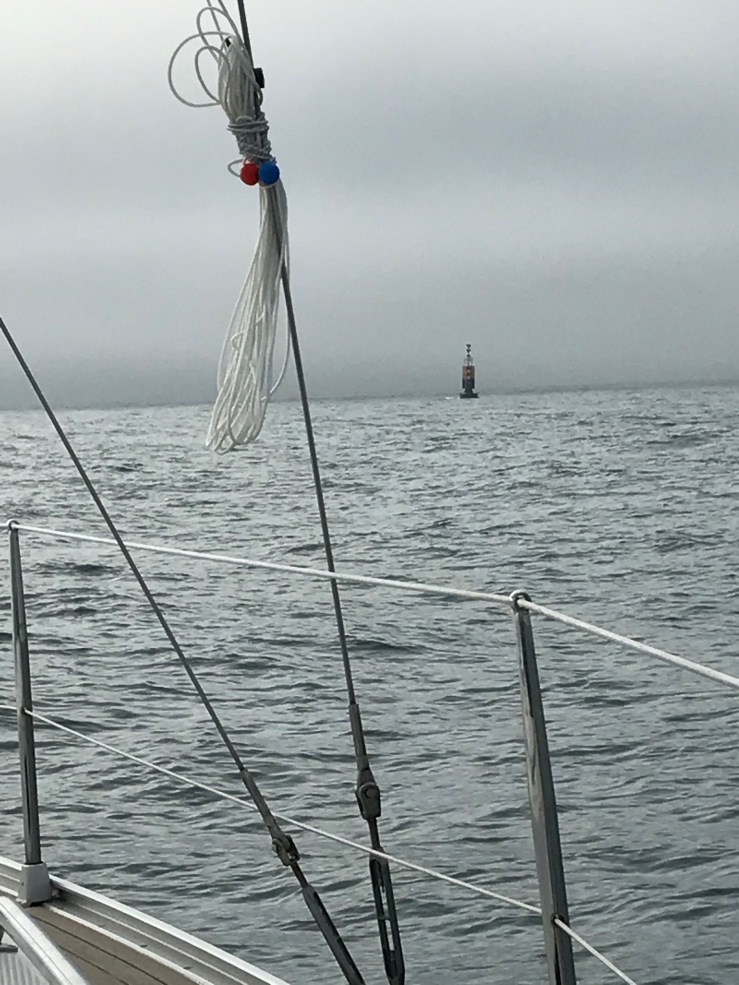 As we monitor Dover Coastguard on channel 16 and 11, we are reassured by their weather forecast that says the fog is patchy, although just now it seems to lack the patchy bit! We are then distracted by a PAN PAN call from a fishing boat that has lost power. Dover Coastguard coordinates various boats to attend including the lifeboat, although half way through the rescue he confuses everyone by saying he is Aberdeen Coastguard!

We decide that we won’t cross the shipping lane if there is fog, we will hang around until it clears or make for Ramsgate. Just as we approach our crossing point there is a burst of sunshine ahead and the fog clears towards France…..a good omen and we really do have a fair wind for France!

It is 0900 and we have reached our crossing point. It is a strictly enforced Traffic Separation Scheme TSS and we must cross at right angles to the traffic and hold our bearing of 135 to make the shortest possible crossing. We have made great progress! A small freighter is coming up on us, but he turns to port and crosses with us, keeping station with us until we are well into the ‘up’ lane. Thisgives us a lot of reassurance that we are doing the right thing! 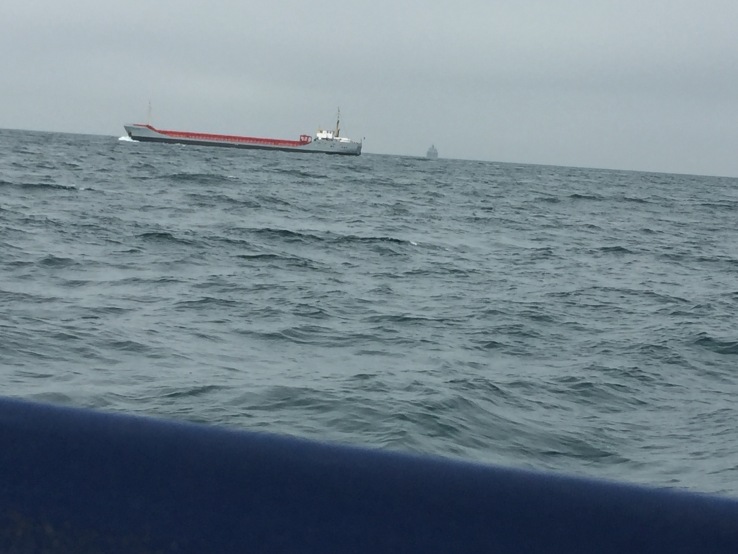 A friendly freighter crossing with us!

The time is now 0935 and we cross the border into France. We can see the Sangettie lightship in the distance. Progress is really good, the visibility is improving all the time and we are having a beautiful sail, under power but with mainsail fully out and flying along at about 7 knots SOG! 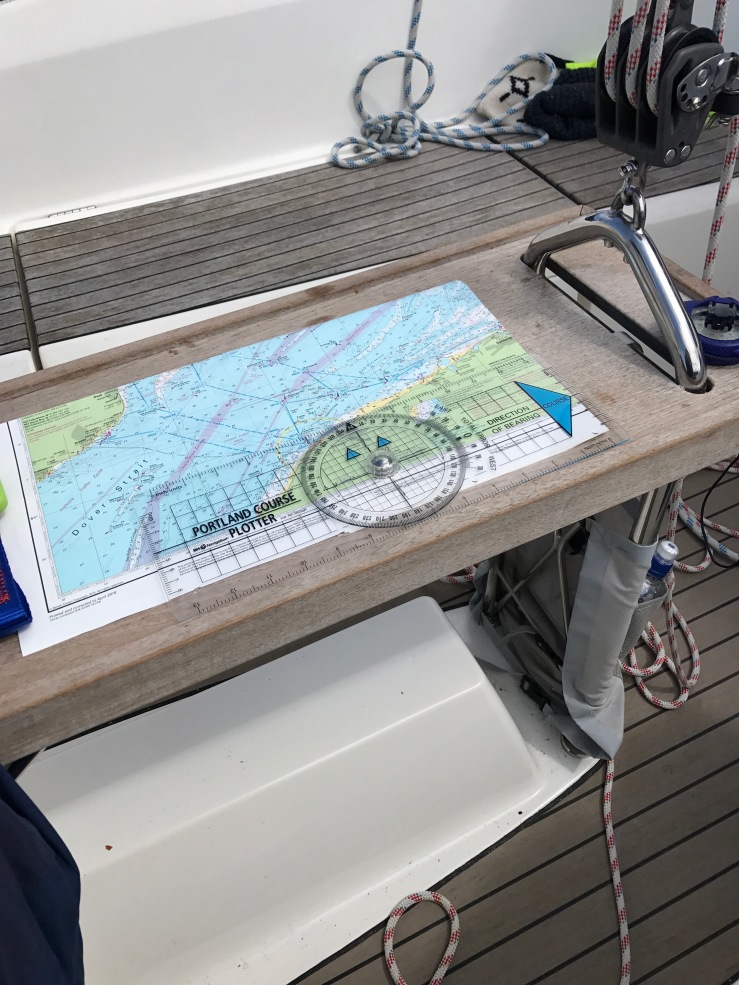 Through the TSS and plotting our course to Dunkerque

It is 1020 and we are now through the shipping lanes, it has taken just 80 minutes! Now we just have to find Dunkerque! The Dyck buoy passes by to port and we head towards the DCA safe water mark. We are now well passed Calais…..although we seem to be in the middle of a large anchorage of very big ships which is a bit disconcerting. At 1055 we switch the engine off for the first time today and we are properly sailing. By 1230 we enter the well marked and wide Dunkerque channel, following the green buoys and avoiding the temptation of Gravellines or Dunkerque West until we reach DW 29. The coastline is a bit uninspiring, it mainly seems to be nuclear power stations or big factories. Dunkerque itself is easy to see because of the two large lighthouses, one very tall, white and inshore and one on the western breakwater with three fins coming from it! We are monitoring the harbour control on Channel 73 and he advises everyone to stay clear as three large tugs and a tanker appear out from the breakwater. I  askpermission to enter and am instructed to head for the Grand Large Marina. Sailing past until I can clearly see into the harbour then hugging the eastern breakwater (taking note of the yacht stranded on the mud near fixed cardinal mark, its owner sat in the tilting cockpit looking ruefully towards the sea!).The visitors pontoon to very long and I slip into the last slot right at the very end of it. I will worry about how I am going to exit it later! 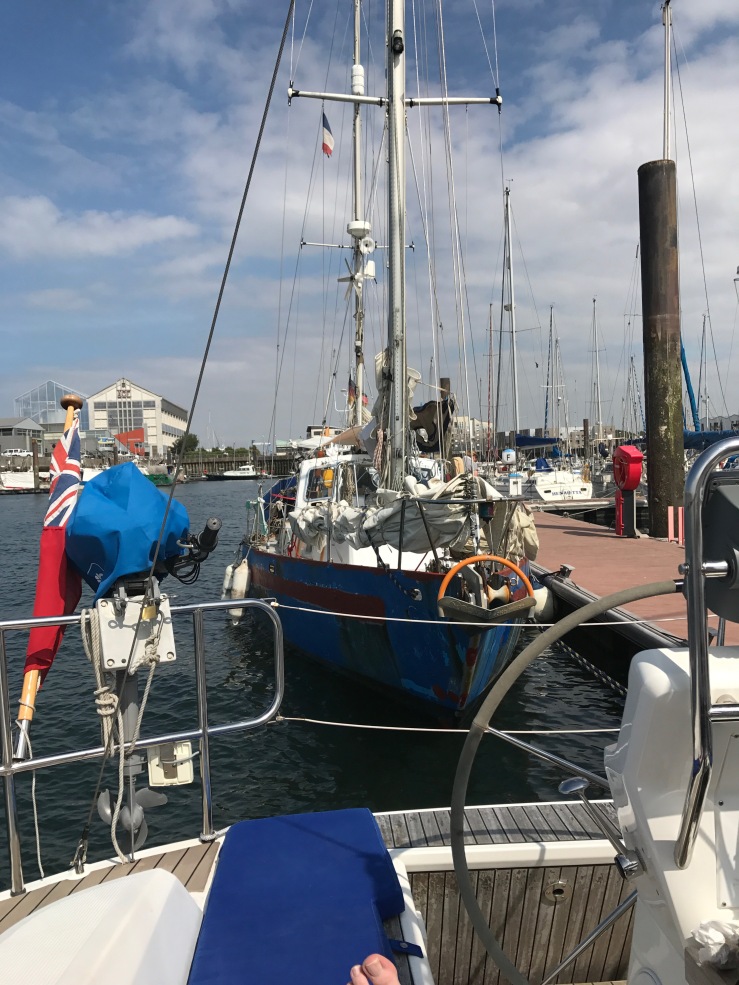 Safely on the visitor’ pontoon 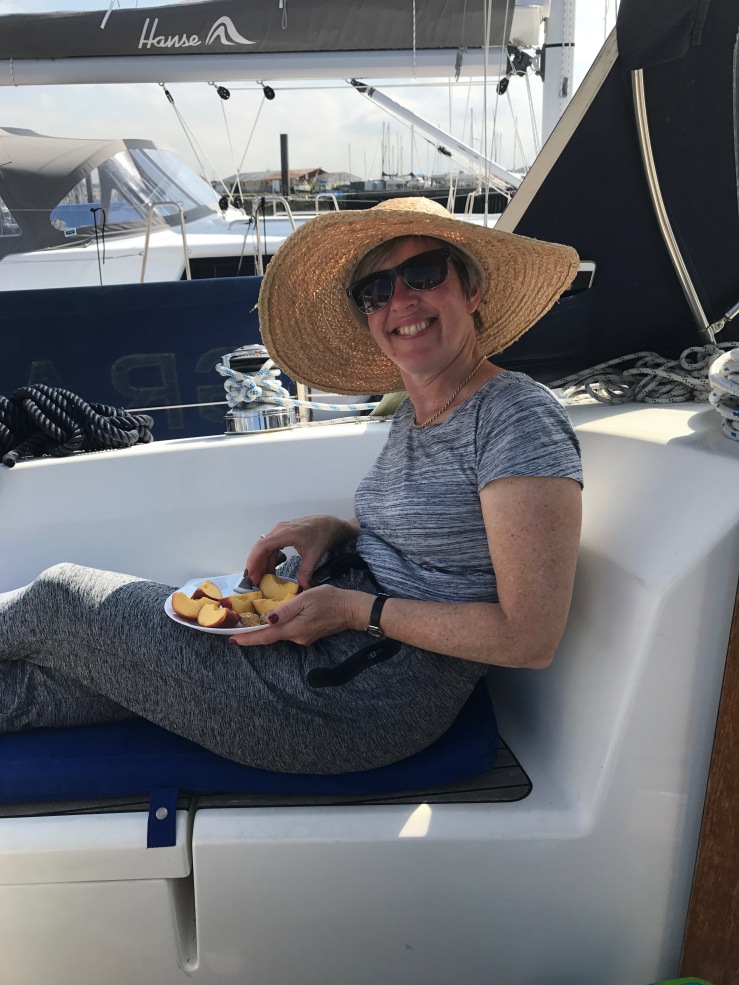 No too difficult this Channel crossing!