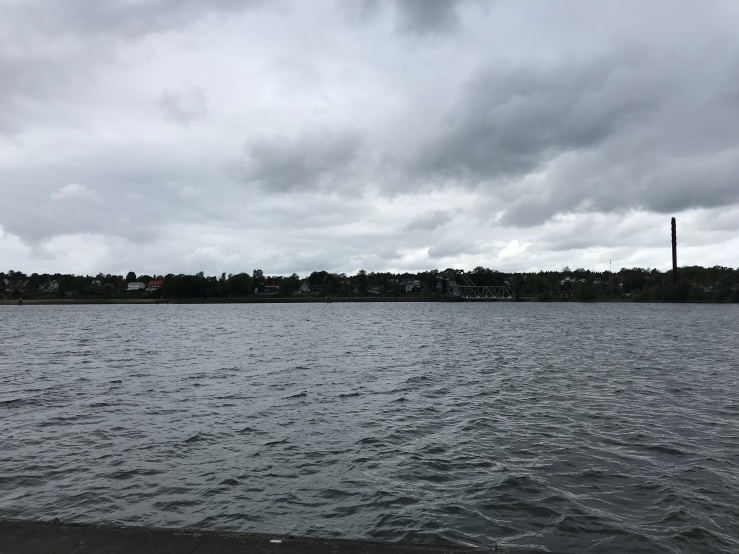 Suddenly the very final leg of our two year Baltic odyssey was upon us! This was going to be our last few days with only 50 nm to sail from the marina at Vanersborg to Lil Bommen marina in the centre of Gothenburg. This is where we had agreed to meet the crew who would sail Grace back to the UK for us before the winter set in.

We only had 6 locks left to do, but they are very deep ones! They are designed to take 4,000 tonne Vanermax ocean going ships. Not actually that big compared with the ones we had met in the Kiel Canal which can be up to 70,000 tonnes but not a welcome prospect to meet in the locks!

Bright and early we cast off, the wind had dropped and we were able to leave the marina without any of the drama of our arrival! This was when a strong gust caught our bows as we searched for a space and almost speared the stern of a motorboat with our anchor. To enter the Trollhatte canal proper, you have to make your way back to the main channel across what seems to be an open patch of water but is in fact peppered with unmarked submerged posts. Returning along the track of our arrival on the chartplotter we made it safely to our next obstacle, the road bridge carrying the main road to Stockholm! We arrived at 0800, peak Swedish rush hour and of course the bridge keeper was in no hurry to open it! The approach to the bridge is lined with wooden and steel posts that directs you to the narrow bridge mouth. As you approach it the lights are supposed to change and the bridge will open. I called the bridge up on the VHF and was told that it will open if I got closer. We kept getting but it still did not open – back on the VHF and told to be “closer, closer”. Okay the bridge keeper want to play chicken! Little did he know that we had sailed the canals of Holland so it would not be us who blinked first!

The old lock at Trollhatte

Once through, we were on our way to the Trollhatten Falls and the two deepest locks on the canal. A large LED sign told us that the next lock opening was at 1245 so we moored up to a pontoon and went to explore. Sadly the museum and cafe were closed but we did go and see the original locks from 1840 and explored the “new” one from 1916. The original flight of locks is an impressive cut through the granite especially as it was hewn through the rock by hand. 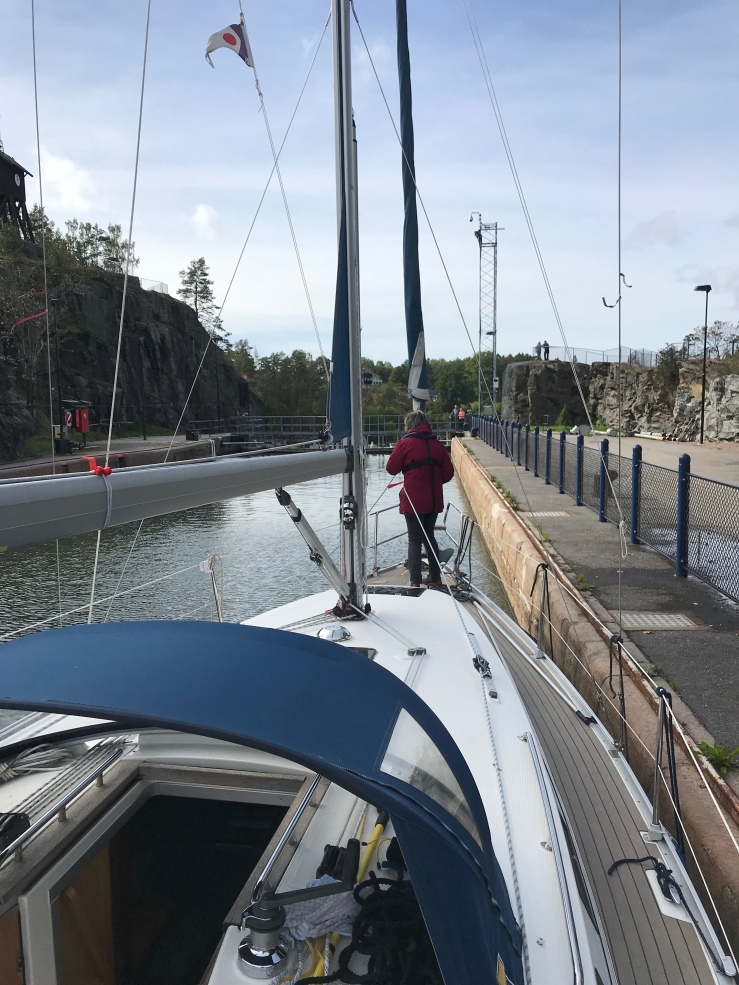 In the new locks at Trollhatte

Bang on 1245 the bells rang and we dashed back to Grace. We had picked up another boat so we will have company. Somehow it feels less wasteful when you share a lock, I guess a bit like the sharing bath water!  The locks are very deep – typically one side is smooth concrete or steel and ideal for protecting the gelcoat and one side is rough rock, not so good for the gelcoat! So always stick to the smooth side! Then just to add interest, the smooth side is not always the same side – it does swap about but we did have a pilot guide which told us. Then in the lock walls there are recesses with bollards in. The idea is that you loop a line round them bow and stern letting it slip through, then just in time slip the line over the next one and so on as you go down. All a bit slimy and involves jiggling the rope with the boat hook while the deck of the boat disappears from underneath you! The nice thing about these locks is that the water flows in and out from underneath rather than through the gates so you don’t get so much surging which would make holding the boat in place difficult. So we begin the Trollhatte lock jive! First reaching up to hold Grace in to the canal wall then waving the boat hook about while trying to put the mooring line over the next hook as it slips past. We were all doing it! 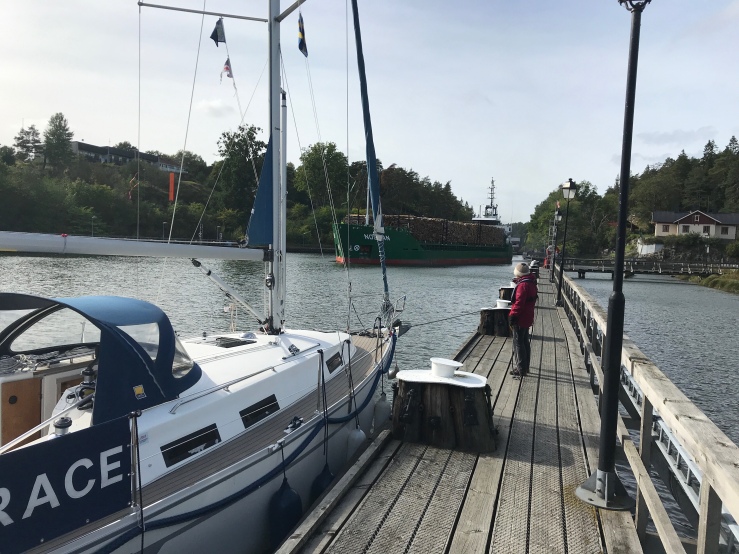 As we progressed through the first flight of locks into a small basin, the lock keeper told us to keep well in to starboard as a large cargo ship was coming up through the lock ahead of us. We did and secured to a waiting pontoon. The boat behind us, clearly did not get the message and started past us and on into the lock. There was a sudden flurry of panic as the lock gates opened and he was presented with the very big red bows of the cargo ship. After much going astern he tucked in behind us against the side to wait!

Work boats on the canal 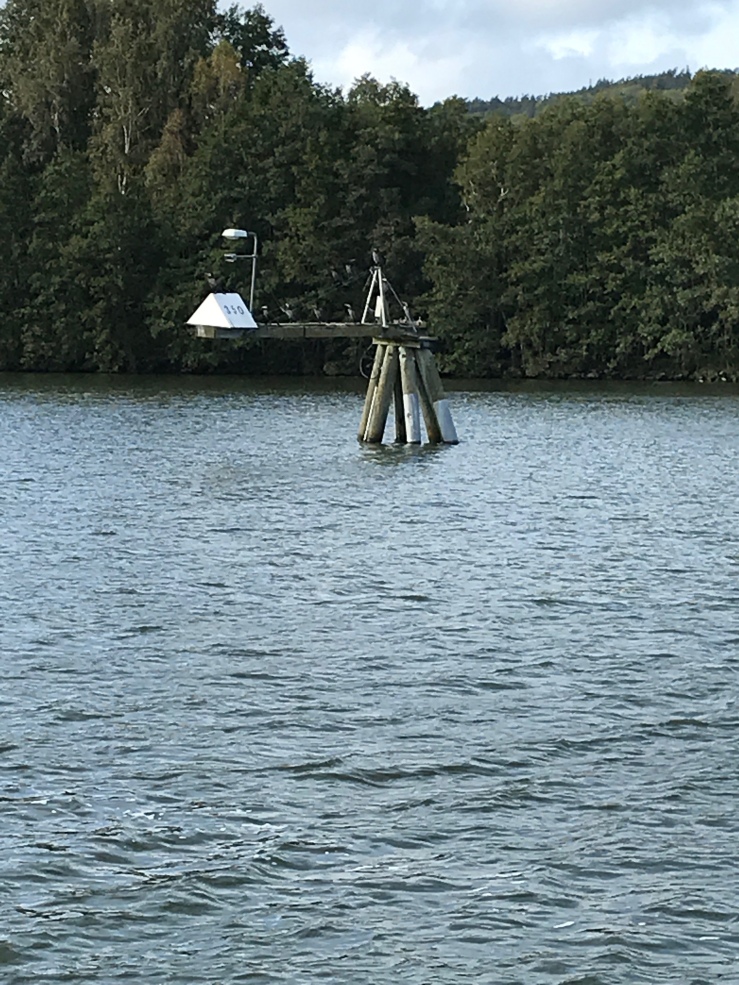 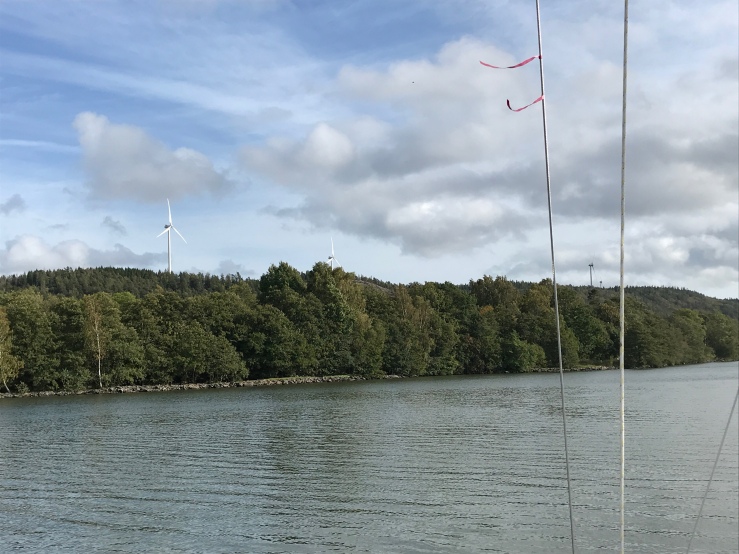 The canal passes through the heart of Sweden

Once down through the lock we had completed the famous Trollhatten Falls. Pressing on we made for Lil Edet, the last lock on the canal. The route takes you through some of the most diverse scenery in Sweden. Up until then our main view of Sweden was of granite rocks, hills and trees but here we passed through rolling green hills and then onto flat open plains. Arriving at the lock about 1700 and decided we would stay at the tiny marina just before the lock and then do our last lock when we were fresh in the morning. Although at the end of the season, the tiny marina was packed with boats that had been put away for the winter. The whole place felt abandoned and desolate and we squeezed into the only space. Venturing into the Lidl in the town for fresh vegetables our opinion was not changed and we hurried back to Grace for supper and bed. We were not allowed to on the canal in darkness so it would be 0900 before we could continue our last leg on to Gothenborg. 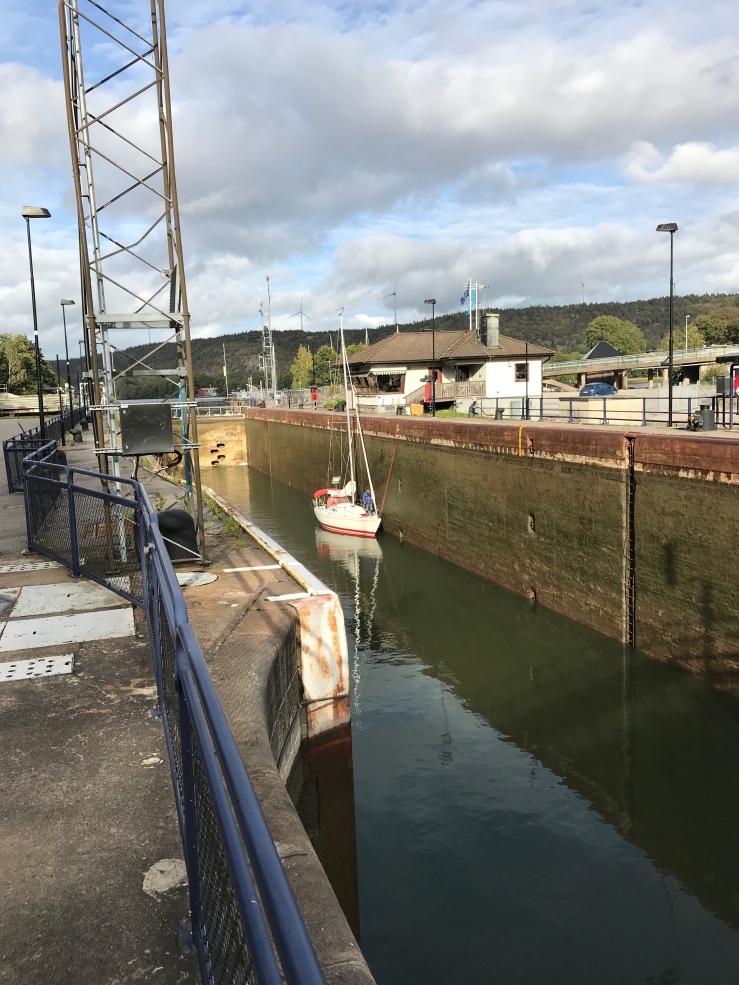 Lil Edet itself quite interesting as it has a large hydroelectric plant that was built  around 1900 and still in operation as demonstrated by the hum from the turbines that ran all night and the man in an orange boiler suit with a big oil can that disappeared through a large blue door every hour! There is also the first lock on the canal that dates back to the 18th century. 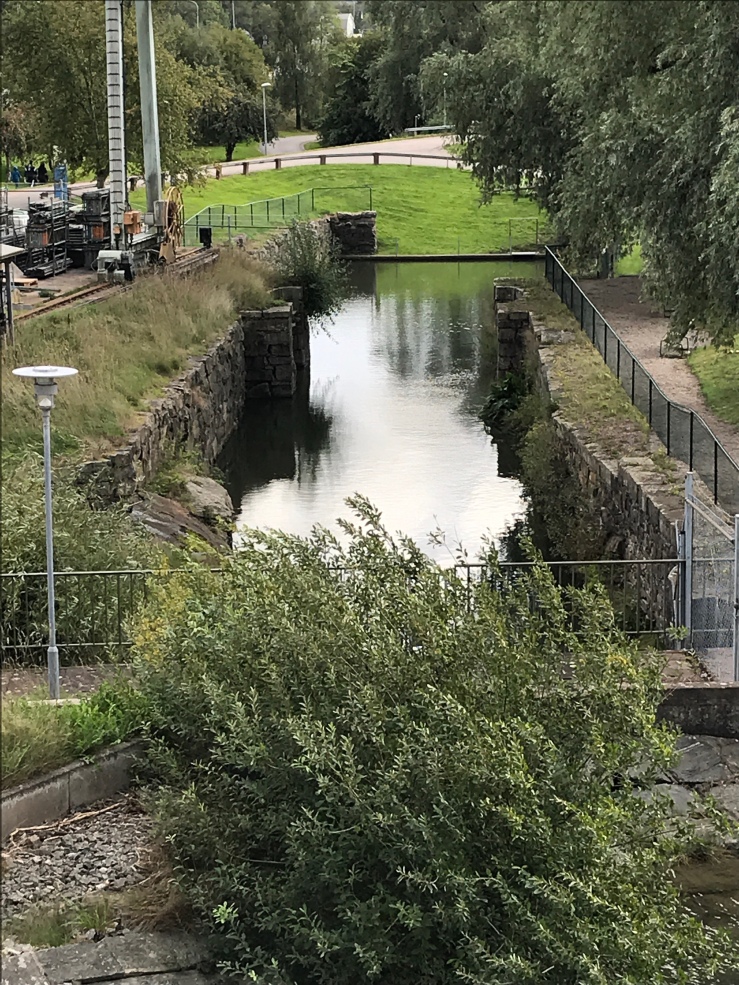 The original lock on the canal

Up early next morning and ready to go at the first opportunity for the final run into Gothenborg. Just on lock to go, what could possibly go wrong! We had completed almost 150 locks in the last two years – this was going to a be demonstration on how it should be done……or not! Obviously pride comes before a fall. So entering the lock, the first thing you noticed was just how high up and open it was!  As usual and when you least want it, Grace’ nastiest vice struck – a brief gust of wind and the bows swing out before we were able to secure the bows to the mooring hooks in the lock walls. As it was such a long lock we motored to the other side with the intention of securing to the bollards on the other side. I hopped off to secure the bows while Anne took the helm but suddenly the bell rang and the water level fell and the boat started to drop away, leaving me on the side just holding a rapidly disappearing mooring line flying through my hands! Quickly Anne radioed up the lock and they reset so we could have another go! Second time lucky! we took a deep breath and slowed right down and it all worked perfectly……we were on our way to Gothenburg. That was our last lock, and what impresses is the depth of them and the way they swallow you up! The Kiel canal ones are much, much longer but you only go down or up a metre. These ones are 20 m deep!

Traffic on the river 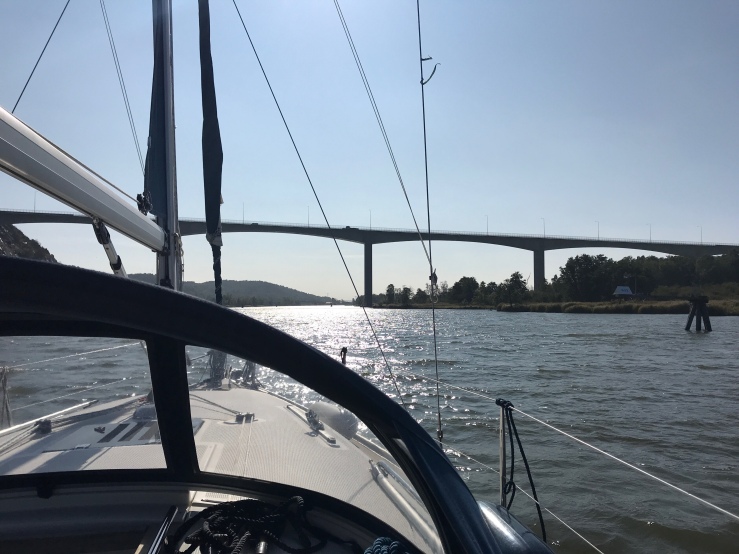 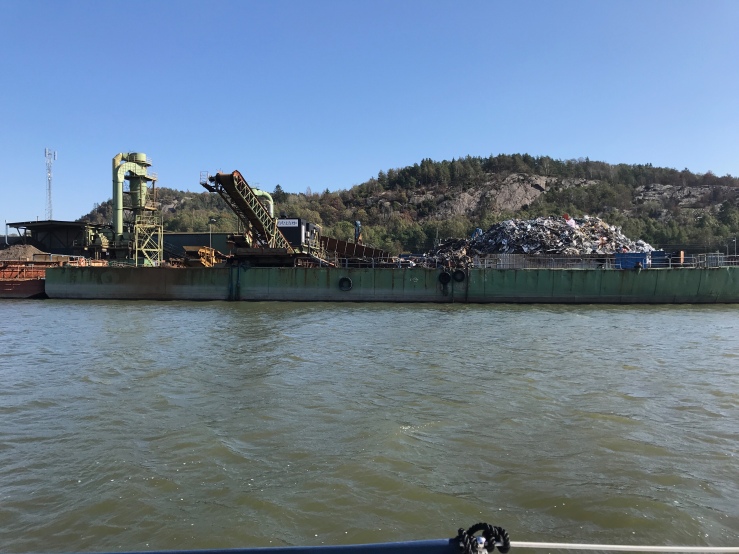 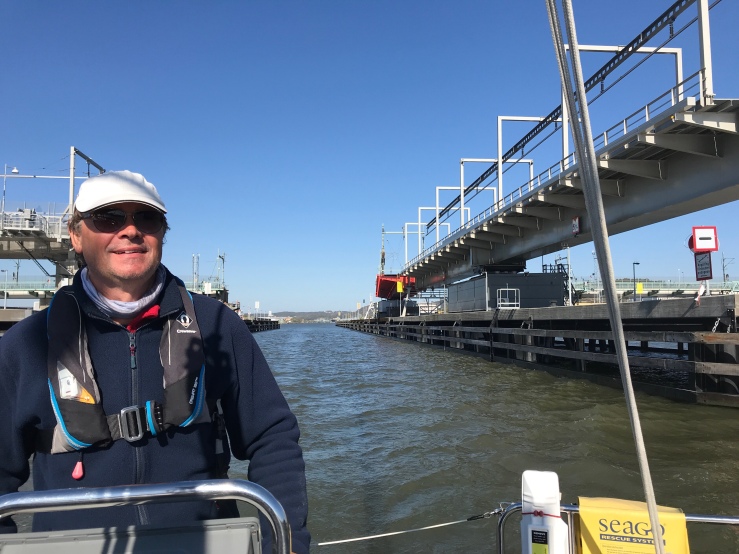 Passing through the busy Marieholmbron

The Trollhatte Canal is really the Goat Alv river with locks at the bumpy bits and waterfalls. So it really takes you through some of Swedens most beautiful countryside, including the first really flat land we had seen for months! On we went under the Jordfallenbron then on to the Marieholm bridge  – this is a really busy railway bridge which has 3 train lines into Gothenburg across it. But bang on time, it opened and we were through to the Gota Alvbron and the industrial suburbs of Goteborg. Our journey was almost complete – after 6 locks, 8 bridges, 44 metres down to sea level and 50nm travelled.

Suddenly we are here! Grace in Lil Bommen 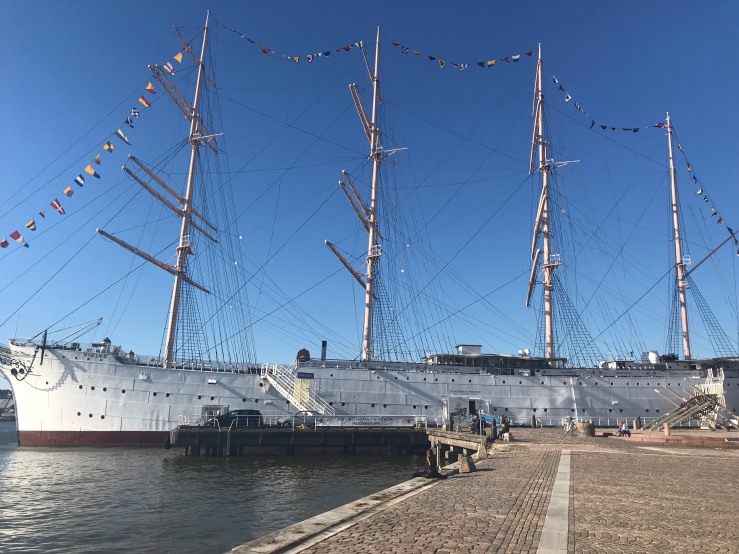 Suddenly it was all over, with the white hull of the sailing barque Viking to our port side, we had to make a sharp port turn, but not too sharp (as all the pilot books warned!) so avoiding the ships bowsprit from fouling our rigging and into the small Lil Bommen marina. It is a lovely little place right in the centre and next to the Opera house but more importantly just 5 minutes walk from Claas Olsen (Sweden’s Robert Dyas!). We had made it with 3 days to spare and to explore Goteborg….which is about two and a half days too much although it does have a nice park! 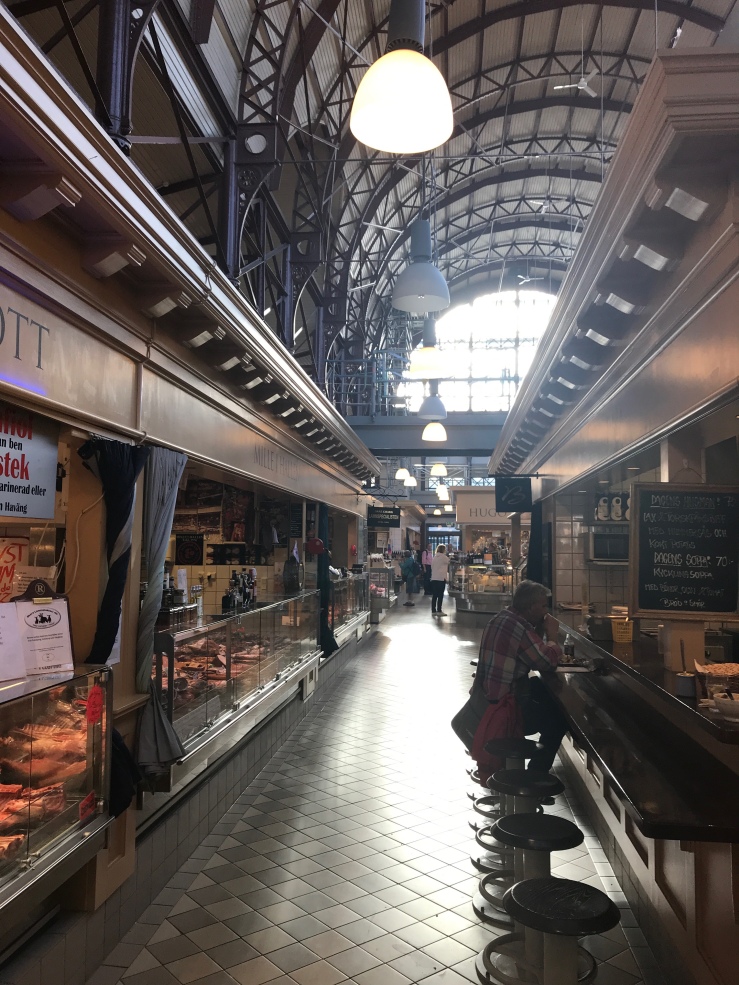 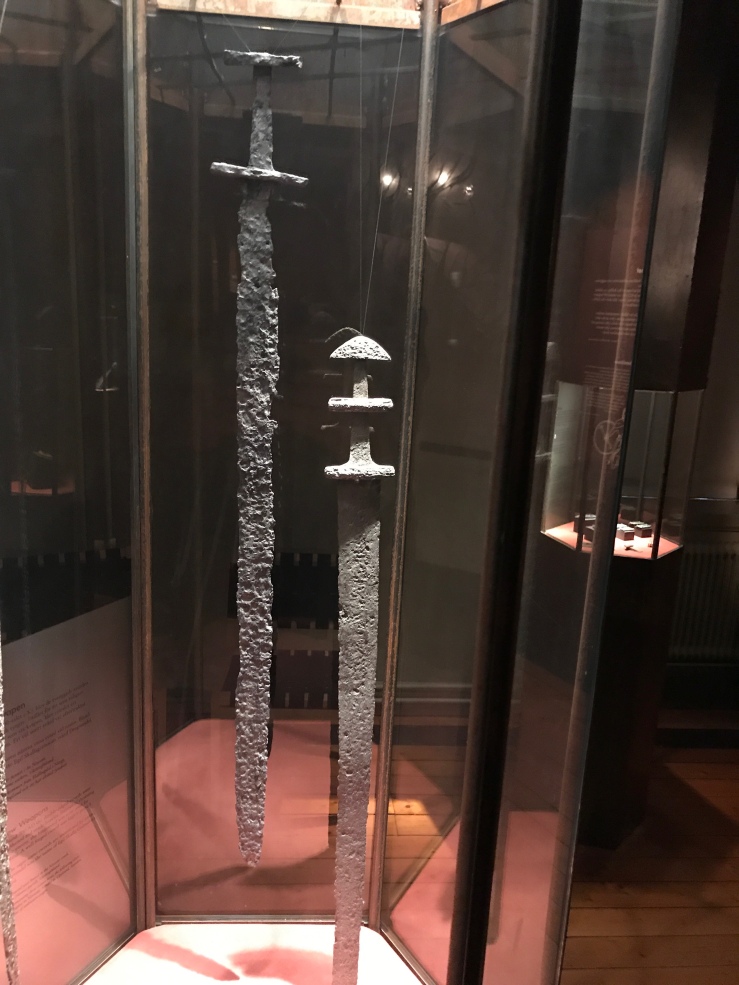 The statues and museums! Gothenburg done! Time to prepare Grace for her trip home.

Now we just have to prepare Grace’s trip home…………but more of that later! 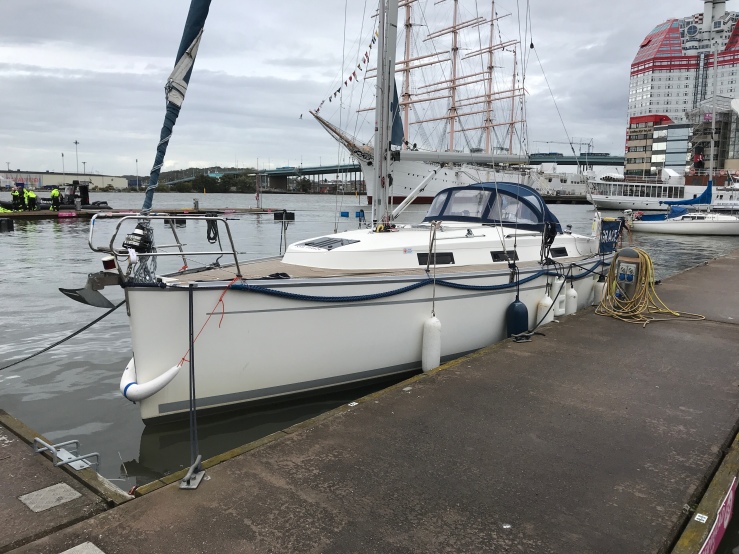 Grace prepared for expected bad weather. We were in a nice warm hotel!