After dropping the SXK mooring buoy at Trosa, we ploughed our way gently through the mud to join the fairway again and out of the Fjord towards Nynasham. We took the inside route through the islands to avoid going round Landsort. Although the weather was beautiful there was a promise of some strong winds later on in the day, just when we would be rounding Landsort. Landsort is a virtually treeless island and old pilot station that juts out into the Baltic and could be described as either bleak and wind swept or peaceful and starkly beautiful depending upon the sea state, weather and your disposition. The plan today was not to find out which! Experience of the islands in the archipelago had taught us that if the island was describe as a disused pilot station then it would be in the middle of nowhere and pretty miserable! It is without a shadow of doubt that tough men these old pilots were!

Nynasham has a nice easy approach passing the Torsten light to starboard then following a well marked channel between the islands north of Ova. Mooring to a stern buoy we spent two days in Nynasham stocking up with food, exploring and eating smoked fish from the very good quayside smokery before setting off to Uto. Every night, just as it went dark they would light the fires to smoke the fish and the harbour would be full of a lovely smell of woodsmoke and warm herring! It was fine for us, moored along way down one of the outer pontoons but if you thought that you had been smart and gone close in and moored to the harbour wall then the smoke and the smell would have been all a bit eye-watering! Certainly the people on a large Fairline motorboat were loudly regretting their skipper’s decision to be parked so close in as I overheard as I wandered past making ‘the long march’ from our boat to the toilets! 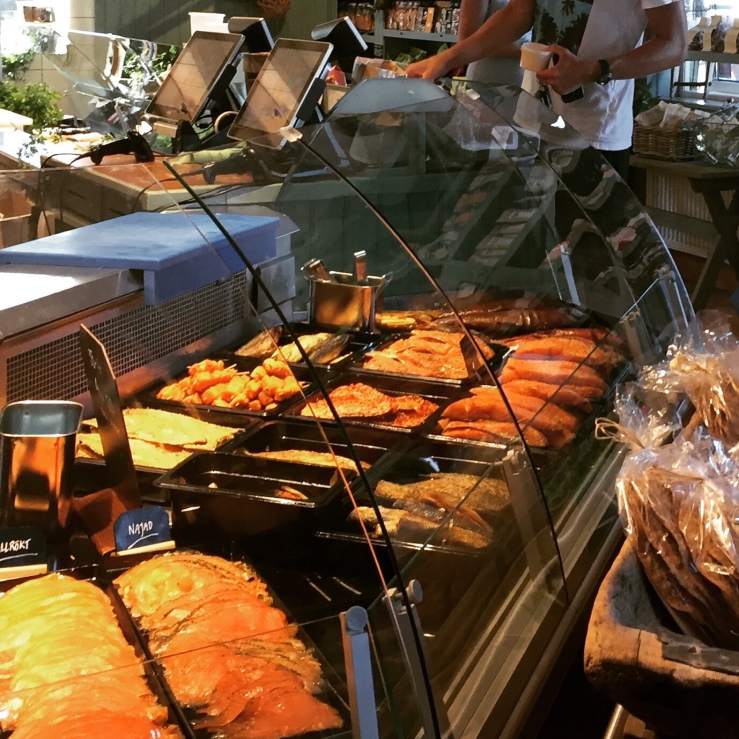 Being peak season and as the main ferry terminal for Gotland, leaving for Uto became an masterclass in ferry dodging. Fortunately we are rather good at it!

Uto anchorage itself is approached through a very very narrow and very very confusingly buoyed channel – especially confusing as there were additional marks not shown on our charts as well some in unexpected places! So sailing through them we had our hearts in our mouths as we gingerly edged our way in past some very unpleasant looking rocks lurking just below the surface! As soon we got through channel, the bay opened out and we rather regretted have bothered to come in as the place was packed with boats of all descriptions and sizes – not a rock or space was spare to jiggle into! It was the busiest place we had see all season. Executing a rather smart pirouette around a floating holding tank pump out station (yes, I even considered mooring up to it!) we precisely followed the route we had come in, out. Time for plan B! We headed down towards Kjrkviken at the far end of the inlet. Although you can see it from the main anchorage, it has a separate entrance and as it turned out, a rather easy approach about 2nm to the west.

What a revelation it was! Away from the boats, cheek by jowl moored in the main harbour. There was some comfortable places to anchor providing you kept clear of the Stockholm ferries which call in here on their way up to the main harbour. Joy of joys, there was also an unused SXK buoy just in front of the church! With yellow SXK flag flying we moored there, 10 metres from the shore in just 1.5 m of water. Swim platform down we went for a cooling dip in the lovely clear water. 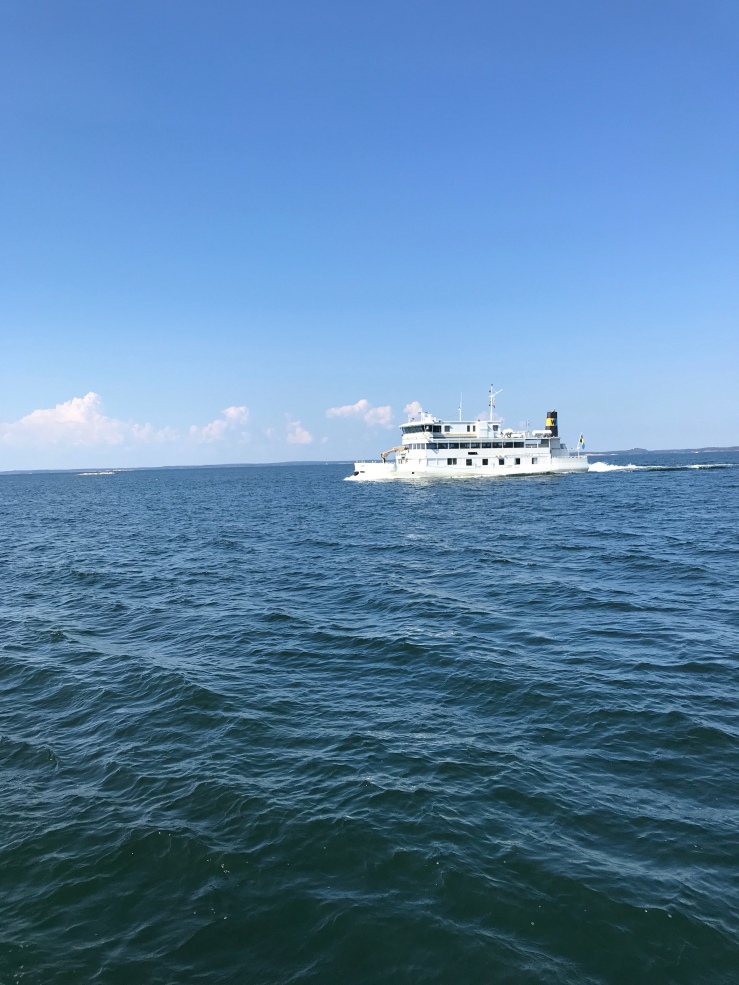 The not so super fast Uto ferries!

Moored on an SXK buoy, just a few metres of the church at Krykviken

Although a green and densely wooded nature reserve today, it must have been an industrial wasteland in the 1870’s. For about 800 years it had been a site of iron ore mining! In the centre of the island there are huge and unfathomly deep water filled holes that were the original mine working, all dug by hand. The Russians realising the island’s importance, even laid waste to it in 1719 when they attacked the archipelago after failing to capture Stockholm. When it became no longer economic to mine ore anymore in 1878 the owners of the mine held a big party for everyone and when everything was finished, the wine and beer supplies had run dry and food all eaten they threw everything down the mine shaft, chairs, tables, plates and silverware in one big final fair well gesture and left!

Deep mine shafts in the centre of the island

With heavy rain and thunderstorms forecast for the morning of the next day we decided to stay an extra day. When the rain struck it was a bit of a shock, not having seen any since mid May! It bounced off the decks and I rushed out and scrubbed the decks! Getting soaked in the rain as lightening flashed around me was probably not the most sensible thing to do with a 16 m tall aluminium lightening conductor stuck in the air! Within minutes it had stopped and the sun was out.

Our first rain in 3 months!

Rowing ashore we went in search of bikes to hire so we could explore the island. At the ferry jetty we found a long row of bikes, all locked except the last two which proclaimed themselves to be hire bikes. Then to add to our temptation they were actually our size, one small and one large! This was too good to be true. We reasoned that they had been abandoned by people who had left for Stockholm on the ferry and if we came across the hire shop we would return them and save them a journey to look for them! So like Bonnie and Clyde we sped off, calling in at the village bakery first we bought a lunchtime sandwiches which were excellent and came with drinks, cake and coffee – a proper picnic! Anne lurked around the corner with our ‘hot’ bikes and we quickly took off again to explore the island and did not stop pedalling until we were safely away from everyone….somehow I don’t think we are suited to a life of crime! 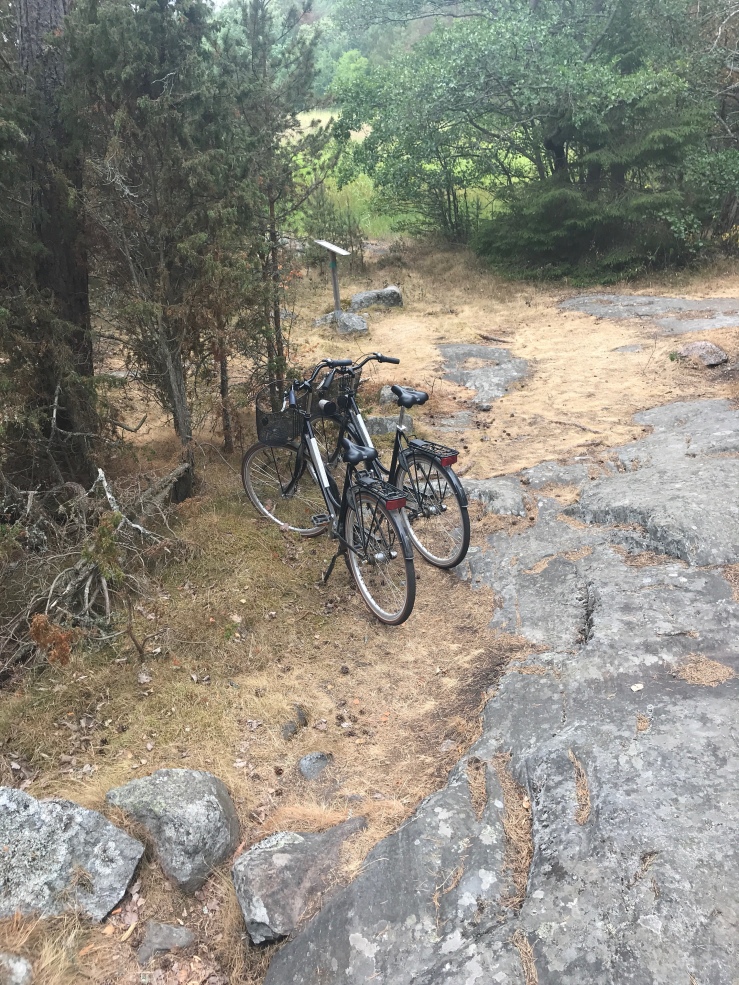 Following a path marked with blue and yellow spots on trees and rocks we disappeared into the forest and tick infested swamps. I never learn and should know by now that for these sort of expeditions with Anne I need to wear long trousers and insect repellent. Occasionally, we would see a bit of bikes like ours protruding from a bush or from behind a rock, clearly these bikes are common property on Uto!

A lovely place for a picnic except for giant ants!

Finally, about 4 hours pushing our way through some dense undergrowth and over some rocks we found nice place for our picnic overlooking a rocky inlet.

Consulting Google maps we discovered that we had crossed over to the far side of the island, and were about as far away from the boat as could be! Retracing our steps, scratched and dusty (us not the bikes) we found our way back to the island’s only one of two roads and headed back to the ferry jetty to return our borrowed bikes. Checking no one was around we wheeled the bikes back to their original places, none the worse for their cross country adventure and shiftily started to slip away. Suddenly, behind us, there was a squeal of brakes and a pickup truck stopped, we froze as a burly tattooed bloke got out, picked up our bikes and a couple of others, adding them to the pile on the back of truck and accelerated away in a spray of gravel. Elated at our coup we ran back it the dinghy and safety of Grace.

Moving on, first to Northolmen and then in to the Kalviken fjord to Tyreso Palace before sailing to Saltsjobaden. Although quite a detour, we had a lovely sail along the fjord in a very gentle breeze, mooring up for the night off a small wooden jetty in the shadow of the palace. The Slott built in 1640 is now a museum and a time capsule of Swedish aristocratic life in the 1900’s. It was a wonderfully quiet and peaceful place to stay the night except after dark local teenagers congregated on the jetty and smoked. It was all tinder dry and I was convinced that the whole lot would go up in flames. It didn’t and these perfectly polite children went off to their homes by about 9.30 pm! 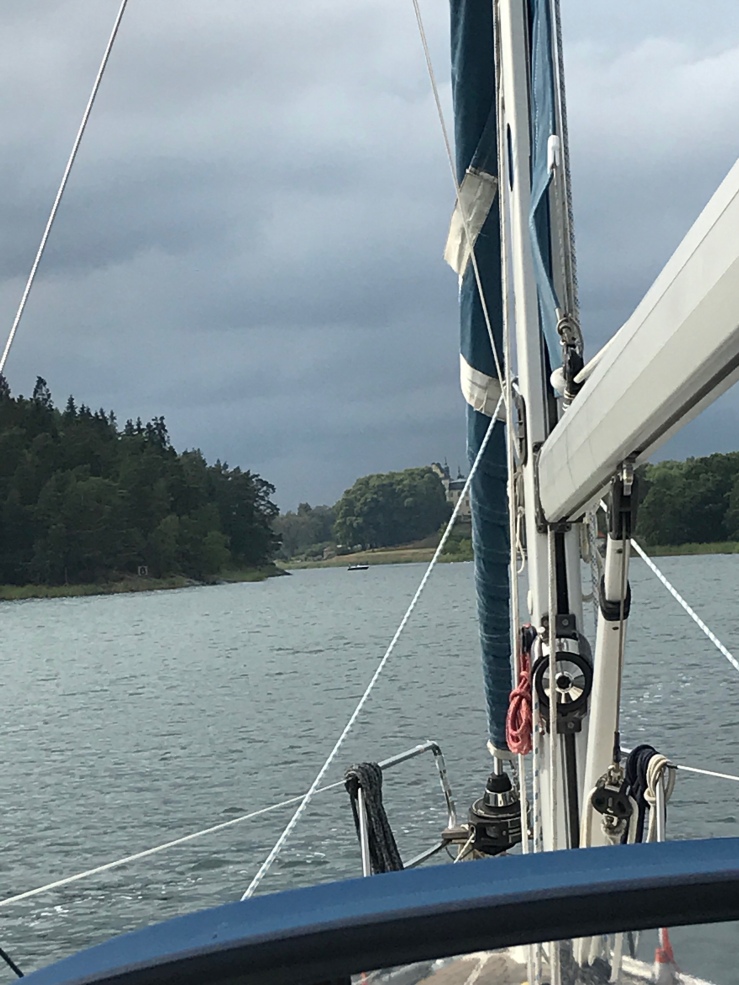 Sailing up the fjord towards Tyreso Slott

Saltjobaden, was the home of the SSS, the Royal Swedish Sailing Club and a bit like Cowes. All very boaty! Saltsjobaden was a popular bathing resort in the 1920’s and had a very grand hotel, now rather faded, whose dining room is to be avoided according to Trip Advisor if you don’t like mice with your meals! It has its own railway line from the centre of Stockholm which takes you along the edge of the Fjord in a bit of a roller coaster ride at breakneck speed in rather rickety trains. 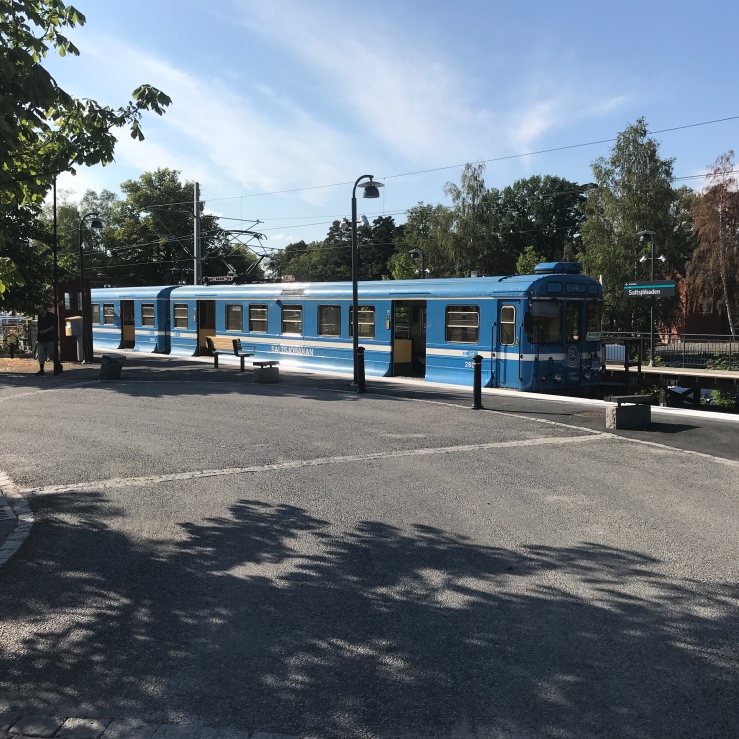 It also has a rather splendid pair of bath houses, built in the 1920’s, a blue one for men and a pink one for ladies. They were built side by side but at an angle to allow for nude bathing so neither side could see each other, although perfectly visible from Grace as we sailed by! They both had 30 m jump towers from which bathers would throw themselves off into the cold water. 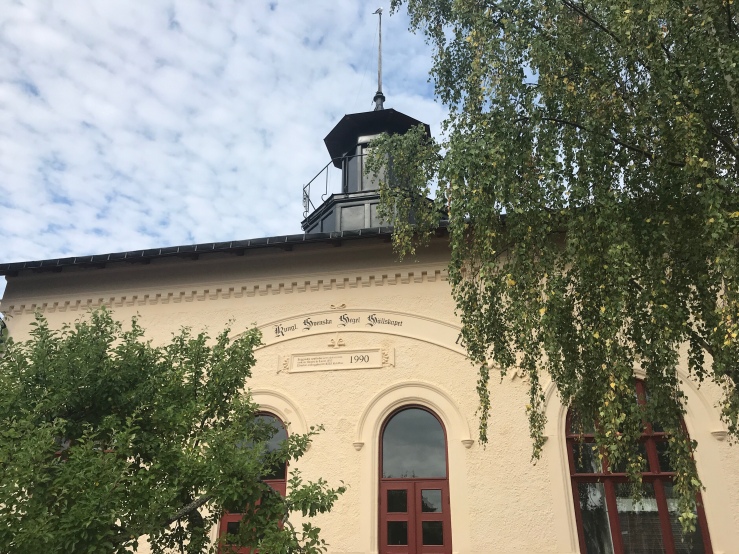 The guest harbour with the not so grand Grand Hotel!

We thought it might be rather a good place to leave Grace while we briefly returned to the UK but realised that it would be much more convenient to leave her in the centre of Stockholm itself and so we moved on Navishamn, pretty much in the nicest part of Stockholm.