Sonderborg seems to have a special place in Danish history. Everything is focused around 1864 and the Danish defeat by the Prussian/united German. They have a fascinating open air museum on the battlefield site above Sonderborg which explains from a uniquely Danish viewpoint the historical significance of the date as the ultimate precursor to the first war and in fact all modern 20th century modern European history!

The 1864 museum
In essence, Denmark in 1845 to 1856 controlled the Duchies of Schleswig and Holstein. Part of which wanted to be German and part wanted to be Danish! Various skirmishes and battles ensued. It is now that the scheming Prussian Otto Von Bismarck enters stage left, like some Victorian melodrama villain rubbing his hands together hatches a plot to creat a united Germany under his leadership. What he needed was a nice easy war where Prussia could step in and save some oppressed and put upon German minority. The Schleswig Holstein question fitted the bill perfectly! A familiar story that has been repeated many times over the centuries!
It all kicked off in 1864 when the Prussian army crossed the Eider river into Danish territory. The Danish army could not resist the superiorly equipped Prussians. At this stage there were lots of references to heroic Danish defence and tactical withdrawals oh and a cold snap in the exhibits. The outcome was never in doubt. It was a battle against a modern army (Prussia) with the latest kit, breach loading rifles and artillery verses what was essentially an army from the previous era, muzzle loaded muskets and cannons and a deluded Danish king.

The Danes then had to abandon the Danekircke, an ancient Bronze Age earthwork near Flensburg, it was of no real defensive importance especially as the cold snap meant that the marshes surrounding it froze and provided no obstacle for the Prussian army to circumvent! It was however of massive symbolic and patriotic importance for the Danes and the failure to hold the Germans there spelt the end of the campaign. They retreated to Dybbol mill, just on the hills above Sonderborg and to some redoubts on the hill for what was effectively a 'last stand'.

Needless to say technology won out and the Danish army retreated to Sonderborg over the Als Sund. At this point Britain steps in and a summit was held in London. Bismarck and the increasingly united Germans demand Schleswig, the Danes refuse. Palmerston, the British Prime Minister is reputed to have told the Danish negotiators 'that it was better to have half a loaf of bread than no bread'! Clearly this did not seem to help as the Danish king thought they could fight on.

The German army simply crossed the Als Sund, entered Sonderborg and put the Danish army to flight, leaving the Danes no option but to sue for peace on what ever terms they could get, which came expensive! Schleswig, Holstein and Luneburg all were ceded to the Germans – essentially a quarter of the whole country! The success united the Germany under Prussia and Bismarck as Chancellor and Wilhelm as Kaiser.
Then the story goes on to say that Otto and Bill enjoyed the success so much that this lead to the Franco German war in 1870 and lots of other battles on the borders around the new German empire until Sarajevo in 1914 and the Great War.

A plebiscite was held in 1920 for the people of Schleswig, Holstein and Southern Jutland in which Schleswig and Holstein voted to remain German and Jutland returned to Denmark. Everywhere we went there were stories about how the Danes found ways of maintaining their links to each other including 'coffee and cake' meetings allowed by the Germans and that the lighthouse on the southern end of Aeroe was shone a light towards the then occupied Southern Jutland to remind people they were not forgotten! 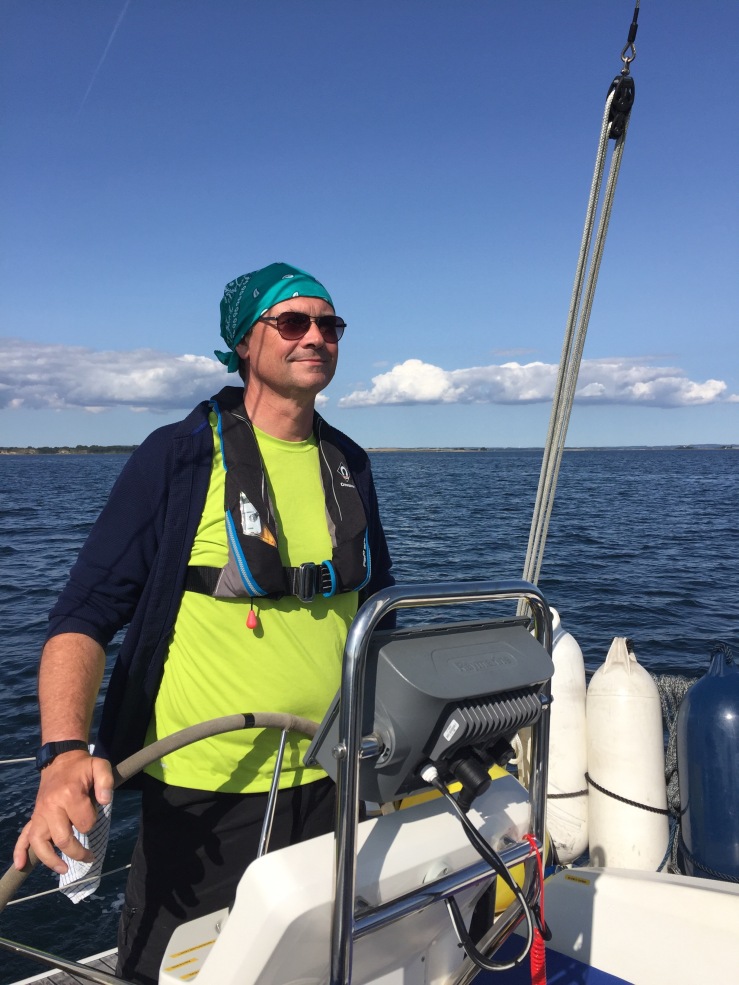 Sailing past the southern tip of Aeroe

Sonderborg and the Slot

This story was then repeated in the Slot (castle) museum, which was rather good too although virtually all in Danish! The chapel was interesting as behind a large padlocked door was stacked in boxes all the rulers of the principality from about 1400 to 1900. They certainly liked to keep their ancestors where they could see them! 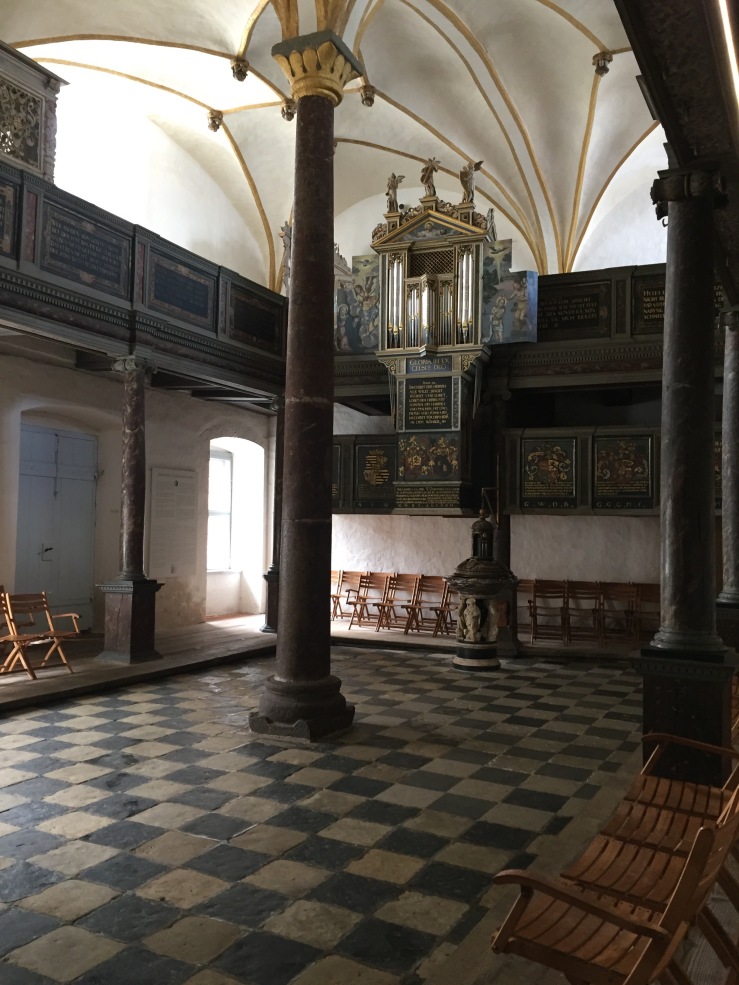 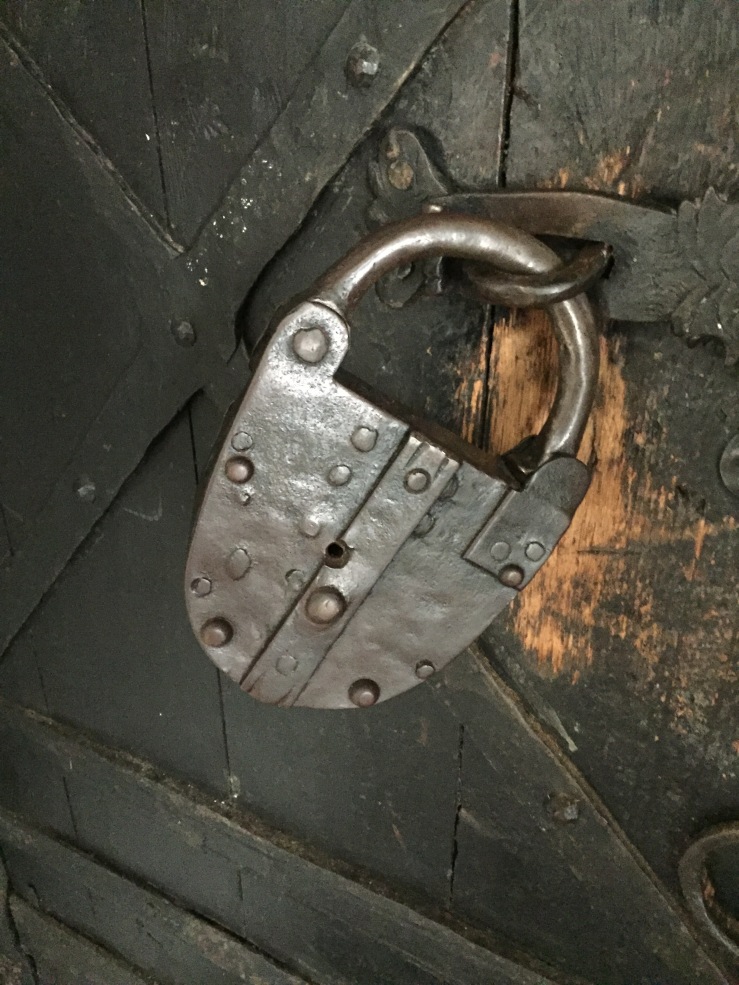 Where the ancestors are kept!

All through the exhibition there were signs saying that this display represented a symbol of Danish German unity and love…….'he doth protest too much' as Shakespeare might have said!