After exploring Norderney for three day and to wait out the bad weather our Windfinder Pro app (it is the one they all use here and gives a 7 day forecast with local tides) showed that we had two reasonable days ahead with westerly winds before more bad weather and storms at the weekend. And although the tides would not be ideal it was our only real opportunity to make for Cuxhaven until next week…..and we really had seen everything Norderney had to offer!

From Norderney the only real option without sailing through the night, and with only two of us that was not a realistic option is to sail to Wangerooge. From there you can sail to Cuxhafen and then on to Kiel Canal or sail to Helgoland, restock with low duty booze and either take the Eider at Tonning and rejoin the Canal at about the 70 km or go to Cuxhafen then on to Brunsbuttel.

The distance to Wangerooge is about 32 nm, but we had to leave Norderney on a rising tide to give us time to take the Easterly Dovetief channel and not the rather unpleasantly rough Westerly Schlucter channel. Potentially this could save time as we had to make the start of the channel into the harbour at Wangerooge no later than 2 hours either side of high tide as it runs across a shallow sandbank.

The first leg out to the open sea through the Dovetief was much nicer than coming in from Borkum, still a bit rough but nowhere near as bad as through the Schlucter. It was a really nice day, with a nice F3/4 westerly and with all our sails up we were making and easy 4.5 knots on a general bearing of 075 towards the Accumer Ee safe water mark towards the eastern end of Norderney. Staying on the same bearing we passed Baltrum and Langerooge and then a further 7.5 nm to Otzumer Balje and then a further 7 nm to where the Harle buoy should have been……but wasn't! The Harle buoy marks the start of the channel into Wangerooge Harbour which is situated at the south side of the island, about 5 km from the town itself. As the Harle buoy was out of position we could not find the start channel marker buoys. Although it was high tide, a steep swell had developed which had totally obscured the buoys and when we could catch sight of them we could not be sure which one it was and we dare not risk going for it.

We follow a large ship into the Wangerooge Channel

Suddenly a large ship turned out of the channel and headed in towards the island. Then there it was, our first buoy, the others followed and with Anne upfront spotting the buoys as they have all been move from their charted positions but we made it across the critical H4 and H6 which marked the bar. We were through and soon in to calmer water and round to the back of the island. Once in the harbour, the harbour master directed us to a space alongside the pontoon. When we were safely moored up, I went to pay my dues and found the harbour master in his office in the corner of the club bar! I ask about the buoys and are told they have been recently moved and there was a note on the bar with their new positions which I should copy before I leave! In all the countries we have visited over the last 6 weeks, this was the first one with a customs post!

Wangerooge is a funny little island. There are no cars, the only transport is an ancient train that takes people from the ferry to the town. There was one waiting in the siding and we slipped on board along with the ferry passengers and sat in the corner with our dark glasses on and hats pull down low hope the conductor would not throw us off and make us walk.

We sneak a ride on the only transport on the island!

The town itself was a supermarket, 6 pizza parlours and the imaginatively name 'Pudding Cafe'! However, the beach was superb! Naturally we ate pizza and walk back the 5 km to Grace along the sea defences and the old Gothic lighthouse! We would need to be fresh for tomorrow and possibly our most challenging sail yet.

It is either pizza or pudding! 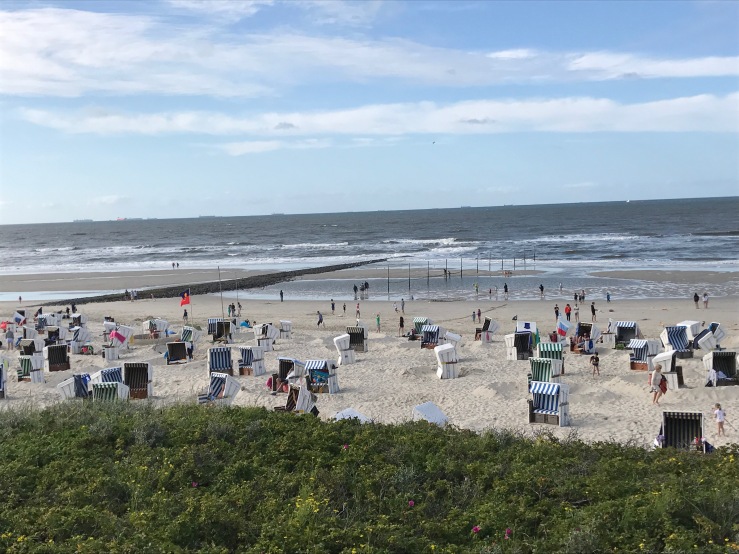 A great beach but a bit bracing! 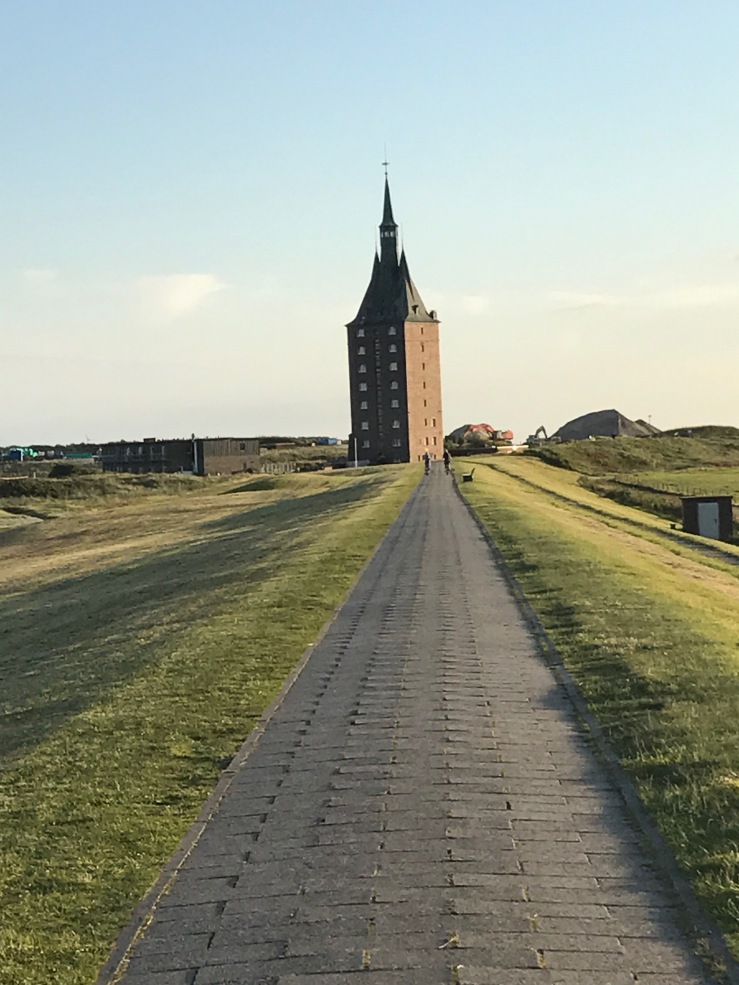