It is Pitch black; 2° degrees, 7:15 am and I was beginning to regret my enthusiasm of the previous night for walking another section of the South Downs Way. Especially as Anne’s warm car disappeared into the distance, leaving me and Hester the dog standing on the very empty and deserted main street of South Harting. Even the White Hart pub my destination for breakfast was in darkness.

The best seat in the house!

Bang on 7:30 am, the White Hart opened its front door and with relief, both Hester and I went inside to be greeted with a lovely fire in the hearth and the promise of a full English breakfast! Fortified, Hester and I set off up the hill past the church to join the South Downs Way. (In truth it was not such a straightforward start! Over breakfast, after studying the OS map I actually set off down the hill, in completely the wrong direction and only realising my mistake when we passed the village pump!)

Careful planning of our route over breakfast!

At the pump I realised I had gone the wrong way!

The very fine church dates back to the 11th century but was modernised at regular intervals in the 13th century and 14th century to keep up with the latest church styles before being burnt to the ground in 1576. It then has continuously undergone improvements by the local gentry to ensure their places in heaven, even employing such illustrious architects such as Sir George Scotts whose buildings include St Pancras station, the Albert Memorial as well as rebuilding the Chichester Cathedral Spire. In fact, he’s is buried in Westminster Abbey as indication of how well regarded an architect he was. 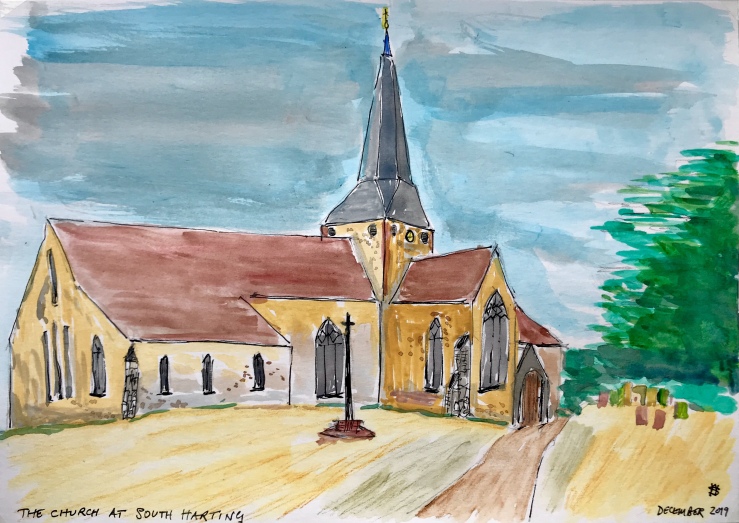 Perched on the hill, the church has an imposing position over the village, a set of stocks outside – clearly for the encouragement of unbelievers. Passing the church, the pavements disappeared and we had to take our chances on the main road dodging the poor commuters as they rushed to their work. We on the other hand rushed on to reach the footpath to join the South Downs Way. 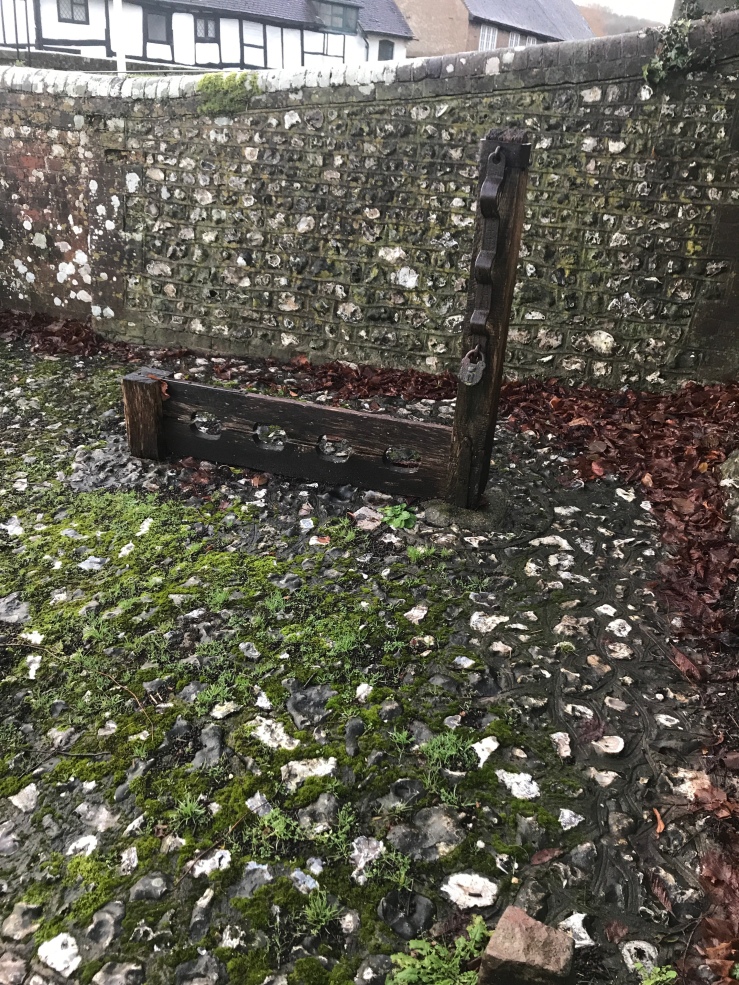 Stocks for the unbelievers!

As we stood at the bottom of the hill surveying a river of mud that was all that was left of the footpath after forestry logging, a Ranger came up and said that we would drown in the mud if we were to try to walk up the path and we should take to the bushes at the far side of path and work our way through the undergrowth, or better still give up! This actually work quite well until we got to the top of the hill where we all ended up in one great big muddy swamp which Hester and I had to wade through with the mud flowing over the top of my boots. But at least we had reached South Downs Way.

A river of mud flowing down the hill!

We now had a choice, if we turned left, we would go towards Buriton and a slightly easier route as far as the Queen Elizabeth Country Park. A convenient place just off the A3 to wait to be collected from and a walking distance of about 4 1/2 miles. Turning right, we would head towards Cocking and Chichester but that would mean traversing Treyford Hill which at over 250 m would be one of the highest points on the South Downs Way and a bit of a steep climb. Especially as the weather was set to deteriorate in the afternoon. So turning left, we headed along 40 Acre Lane towards Smallwood farm.

Setting off down the 40 Acre Lane. 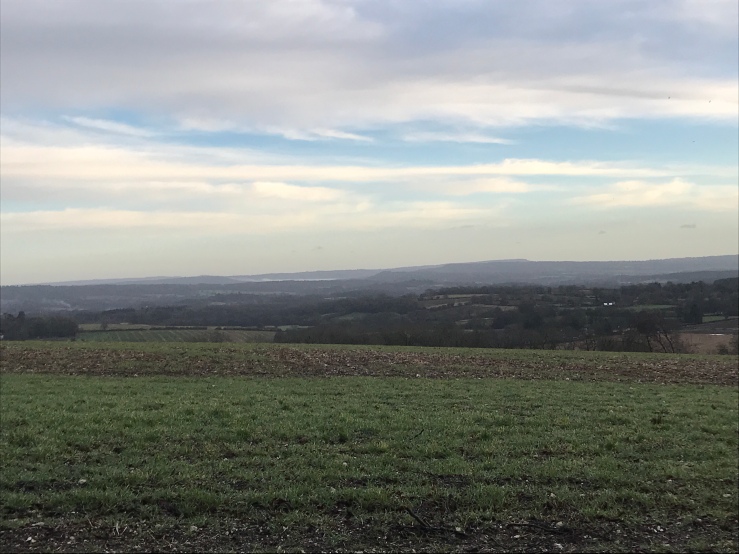 It was all going very well and we were enjoying the December sunshine when Hester suddenly scented a deer and set off in hot pursuit! Leaping a 4 foot high fence in one bound and taking off up across the field, my worst nightmare had begun! I’m in the middle of nowhere and I’ve lost the dog! The deer outpaced Hester but actually not by that much and disappeared into a copse – in a real Benton moment I stood yelling Hester to no avail! Way up at the far end of the field, she finally stopped chasing the deer and turned round and trotted back towards me, chest puffed out and looking very pleased with herself! The only snag was that she could not jump the fence again without the surge of adrenaline from the chase and I had to coax her back through a hole in the hedge.

Hester went over the hedge in one bound!

Following the ridge line at a height of about 150 m there was a tremendous view towards Hemner Hills. Walking past Smallwood farm we followed the road towards Old Ditcham. When you are obviously on a ‘walk’, the people you meet are friendly and stop to chat and a motorcyclist even stopped and waited until we walked past in case we got splashed with mud from his wheels. Although at this time of year you don’t see people for hours on end, those you do are always happy to exchange mud stories! Tramping a further 2 miles we reach the chalk pits at Buriton. Back in the 1940s the whole area was an enormous chalk quarry with lime kilns belching out black smoke on every hill. The Navy even brought up unexploded mines out the chalk pits to defuse them in safety (except for those diffusing them of course). But what a contrast, now in just 80 years the whole place is completely rewilded, nature has taken over again!

Following the path, we climbed the steep War Down and into the Queen Elizabeth Country Park. We had made tremendous progress. It was now 11 am and we had covered the 5 miles to our planned pick up point and it was only just time for coffee! Admittedly, with aching knees we went into the very dog friendly café in the visitor centre. It was great to sit down and just as I was contemplating how long I could stay there and whether I would have shepherds pie or lasagna for lunch when Hester now fully recharged, bounced up and was ready to go walking again. So off we went! 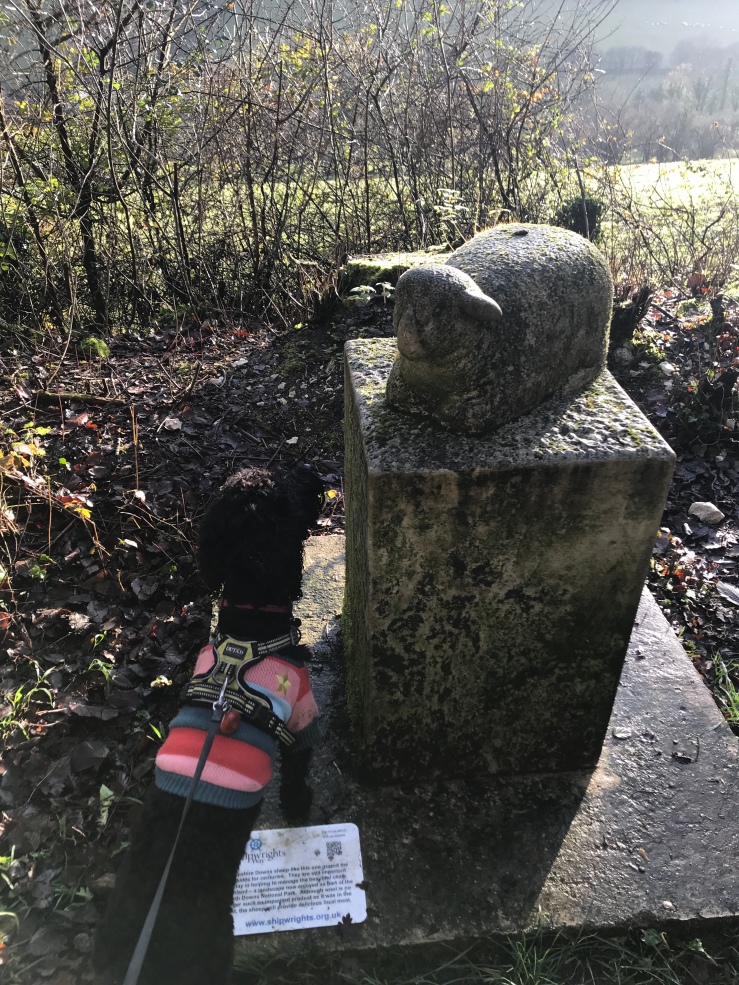 A confused Hester! This sheep does not smell right! 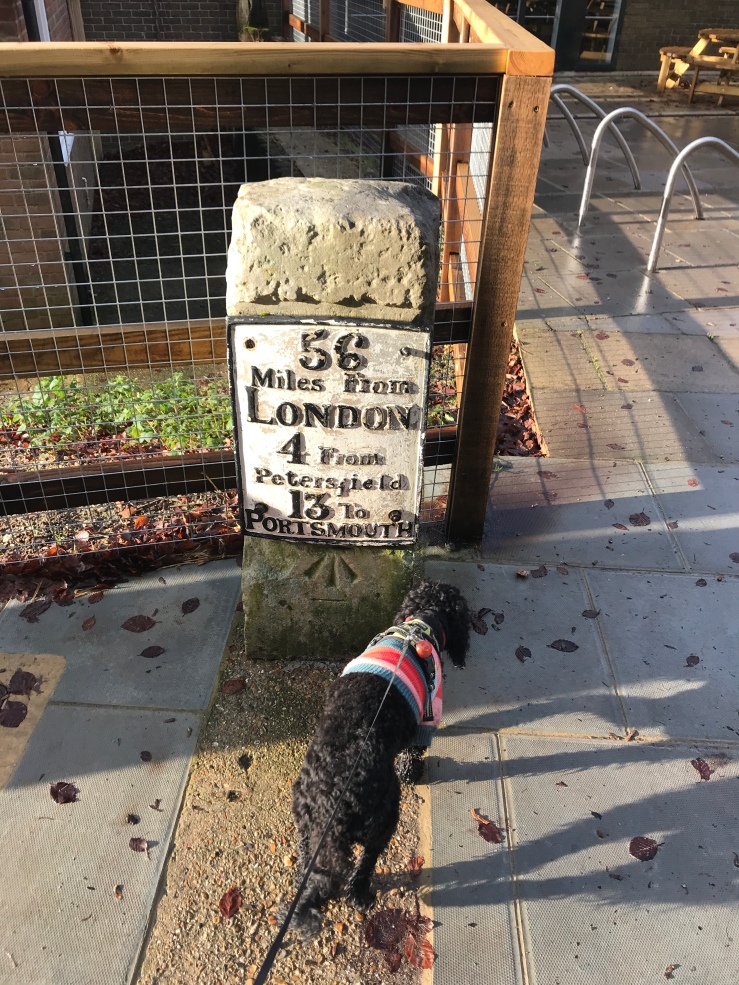 Just the right time to stop for coffee!

The next part of our walk.

So, crossing the A3 we headed up Butser Hill. At around a height of 200 metres you get a great view of the A3! It is a bit of a let down as it is a long steep climb and you rather expect something better than the A3. We now reach the top of the ridge and we set off along Claypit Road and across Hillhampton Down. For an increasingly grey and windy day in December there is an awful lot of parked cars up there with steamed up windows – clearly they were not there for the view!

Great views of the A3!

At the end of the road we took the path to the right across Tegdown Hill. This felt to be the homeward stretch and in some respects the nicest part of the walk with open fields and expansive views on either side and a firm dry chalky path under foot. 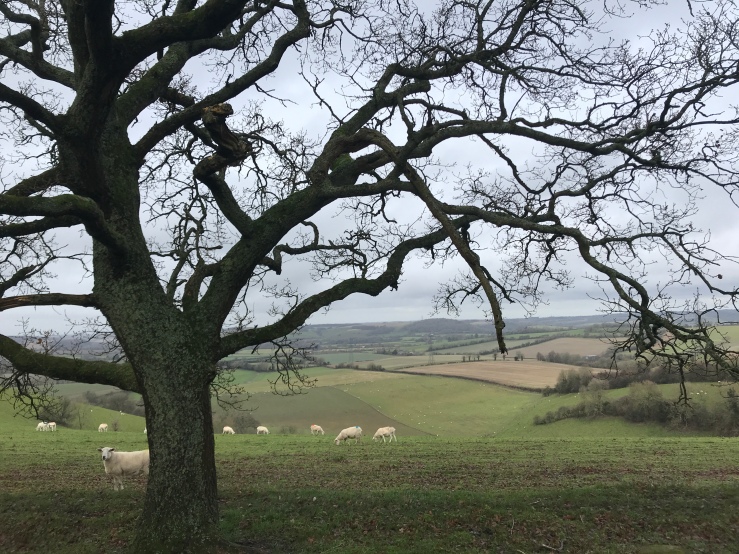 Tracking along the hill line, the wind had got up, the sky had become very grey and rain did not look very far away, so picking up our pace we passed through Hyden Wood, the path deep in crispy ash leaves through which Hester joyfully ran and jumped, clearly enjoying the sound they made. Deep in the valley to our right was the source of the River Meon, we were now at Hyden Cross and journeys end. After 9.5 miles and seven hours later Hester and I were sat in the warm and dry of the “Sustainability Centre” (a popular stop with us SDW walkers!) enjoying vegan chocolate cake and fair trade coffee and waiting for Anne to rescue us!

Journeys end and the source of the river Meon 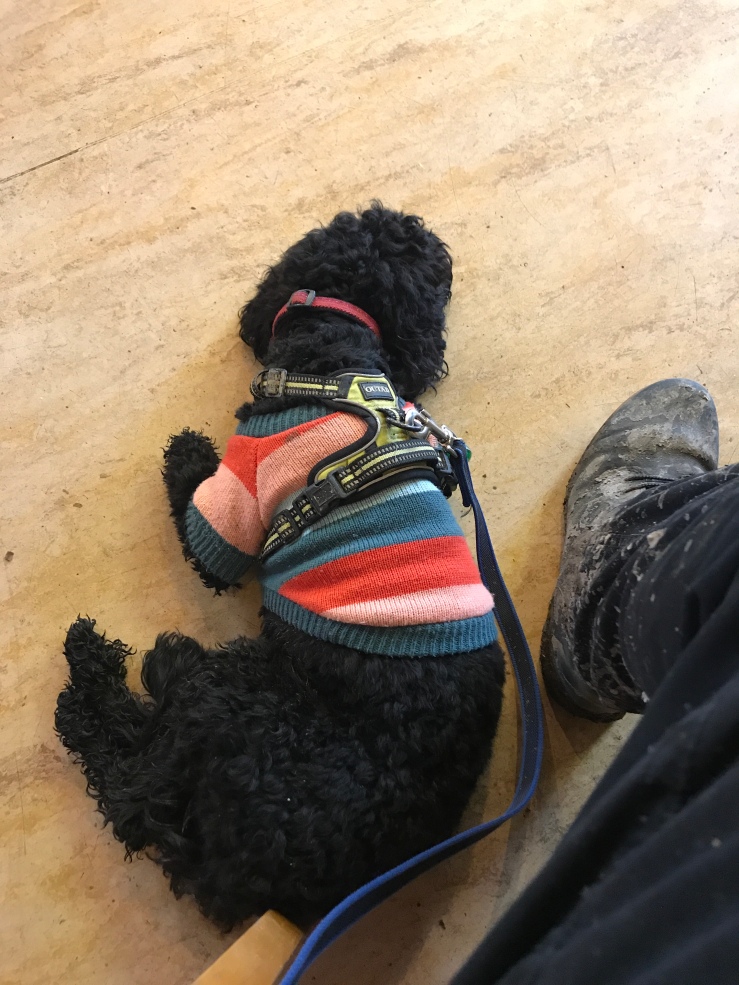 Finally stopped for coffee and cake!